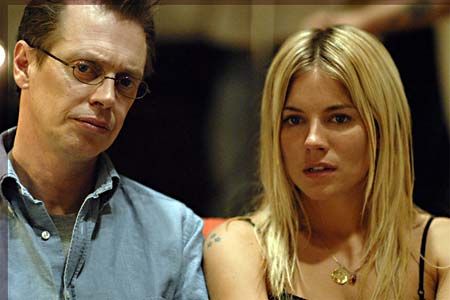 Here’s an interesting story behind an uninteresting movie: In 2004, controversial Dutch filmmaker Theo van Gogh (great-grandson of Vincent’s long-suffering brother Theo) is murdered by an Islamic extremist while bicycling to work in Amsterdam, causing an uproar of artistic indignation and xenophobia in his native Holland. Three years later, his producers decide to enlist three American filmmakers – actor/directors Buscemi, Stanley Tucci, and John Turturro (three of the most recognizable faces, if not names, from the Nineties indie-film world) – to remake three of van Gogh’s films in English, all set in New York City, as a tribute to their fallen colleague and as a sort of “fuck you” to naysayers everywhere who choose to express their opinions with a gun. Buscemi’s Interview is the first film in this series, though with its modest plot about two people alone in a room talking for an hour and a half, its unflinching dissection of sexual mores and societal hypocrisy, and the fact that it stars Buscemi, you’d be forgiven for thinking the movie was not new but rather an escapee from the Miramax vault, circa 1995. Buscemi plays Pierre Peders, a news journalist and former war correspondent who – for his sins – has been condemned to writing celebrity puff pieces. His current task, an interview with an evening-soap star named Katya (Miller), takes place on the same night an enormous political scandal is breaking in Washington, so you know Peders is going to be in a sour mood and that he’s going to take out his grief on the beautiful young actress. What you don’t realize, however, is that Katya can give as good as she gets, and when the two retreat back to her lavish, airfield-sized loft in Greenwich Village, they begin an evening of emotional cruelty that would make John Cassavetes cringe. Expletives are used, objects are thrown, sins are committed, liquor is consumed, lies are spoken, trusts are broken. And then … the video camera comes out. (Only in the movies do portable video cameras double as miniature confessionals.) Buscemi and Miller do their best with what they have, finding at least some small redemption in two dislikable characters written into an improbable situation, but emotional honesty in the service of nonsense is still nonsense, no matter how many scabs it manages to pick at. 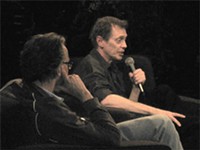 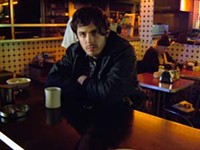 Lonesome Jim
Steve Buscemi directs this story about a lovable loser who moves back in with his off-kilter family in Indiana. 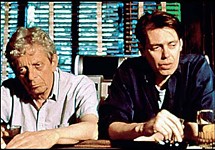 Trees Lounge
Buscemi wrote, directed, and stars in this penetrating movie about a hopeless alcoholic who nevertheless hopes for something more out of life. The attentions of a lusty 17-year-old (Sevigny) is the last thing this guy needs.