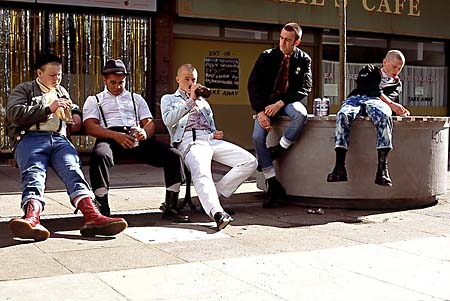 Somewhere between the pop jouissance of Guy Ritchie and the social realism of Ken Loach, this ballsy drama freeze-frames bleak Thatcherite Yorkshire and exposes its racist underbelly. Writer/director Meadows announces himself with an assertive montage of smashed windows, street riots, and Thatcher playing a game of Missile Command, then turns the movie down to a thoughtful simmer for the semi-autobiographical story of a descent from mischievous schoolboy to junior skinhead. Friendless – and fatherless from the Falklands War – Shaun (Turgoose) meets a passel of rude boys under a bridge, and at first it’s all fun and games: walking in slow motion to rock-steady music, wearing silly hats and romping around like wild boys, smashing shit in the many abandoned, lawless places available in town. Shaun gets a buzz cut from some New Wave girls, a natty shirt, and suspenders, but he also gets a sense of belonging made palpable by Meadows and his young star. Enter Combo (Graham), who immediately assumes control of the group upon returning from a three-year stint in prison. His white-power rap polarizes the gang, but Shaun remains, spit-swearing adolescent loyalty to a violent neo-Nazi. The film slows down and thickens as Shaun becomes embroiled in a subculture of hate – in moments, it’s a little talky, but it doesn’t lose its intensity. It’s still full of adrenaline and testosterone. Scenes of sickening violence and hostility emerge at times from the slow-boil narrative; Meadows’ job is to reveal the depths of cruelty while reminding us of its sinister attraction to young people with few prospects. As with the similarly themed American History X (but with a more low-slung feel and a more naturalistic approach), the film’s success finally depends on its leads as the initiate and mentor. Ginger-haired Turgoose’s hound-dog eyes and doughy earnestness make his character’s corruption especially poignant on the dramatic level – he looks like a young Paul McCartney – but Meadows also plays his boyish mien for ironic impact: With the right training, even a kid this cute can bash immigrant shopkeepers. Graham (sidekick Tommy from Snatch) has a forceful, malignant presence but evinces not only fatherly regard for his own but also the hurt pride of men in desperate times. 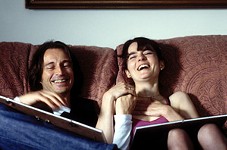 Once Upon a Time in the Midlands
British romantic tale uses the gunslinger mythos as a means to explore romance and regret.