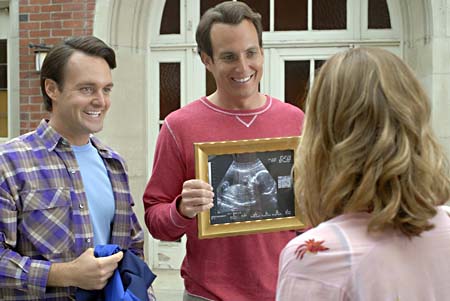 In the great catalog of dashing Hollywood lead male characters who’ve no idea what to do with women – Longfellow Deeds, Felix Unger, Norman Bates, and on and on – the Solomon brothers might constitute a new paragon of loopy ineptitude. Like Deeds, they possess a wide-eyed innocence about their ignorance; like Unger, they’re grown men living with other grown men (namely each other); and like Bates, they might very well be sociopaths. Take, for example, John (Arnett, who played the self-deluded Gob on TV’s Arrested Development): He spends his time trying to pick up women in grocery stores, first paying for their groceries when they’re not looking and then crying foul when they call store security on him. He can’t understand why his approach doesn’t work; it’s no different than buying a woman a drink in a bar, right? Then there’s Dean (Saturday Night Live’s Forte), who kicks off a blind date by planting a lingering, wet kiss on the girl’s father, figuring it’s the quickest way to show respect. The date ends quickly thereafter. These are the kinds of absurdist moments that seem to come pouring out of Forte, who wrote The Brothers Solomon and who, with his starched hair and overly soothing voice (both clear signs of insanity), may be the creepiest comedic actor to ever grace the SNL stage. The plot of his movie – which follows John and Dean as they try to make, adopt, or steal a baby so that their comatose father will have a grandchild to live for – is little more than an excuse for elaborate acts of comic awkwardness and well-intentioned deviance, a few of which are absolutely brilliant (namely a brief sequence in which Dean tries to train his brother to see diaper-changing as something to look forward to rather than fear; I’ll just say the joke involves chicken fingers and a dead bird and leave it at that) but most of which are merely squirm-inducing. I can’t figure it out: You’ve got three great comic talents in Forte, Arnett, and director Odenkirk (Mr. Show) working together in relatively untried and controversial comedy territory – child-abduction jokes, bits about adoption-agency return policies, etc. – and this is all we get? A syrupy fable about love and family? What happened? Did they lose their nerves? Or did some meddling studio executive pull them back before they went too far out on a limb? The comedy gods hate a coward, so let’s hope it’s the latter. 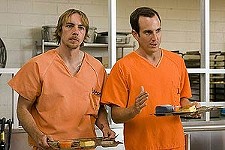 Let's Go to Prison
Bob Odenkirk directs this comedy written by the Reno 911! team, but consider this one disarmed and extremely pointless. 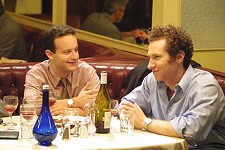