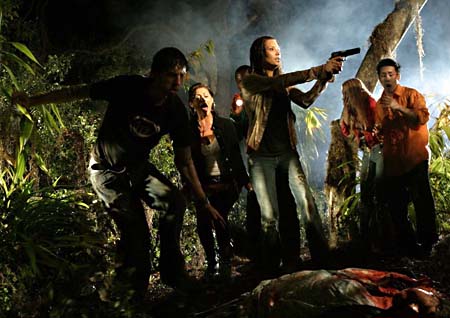 Hatchet, the debut feature from Adam Green, picked up a slew of awards at last year's Fantastic Fest, and it's easy to see why: No other film in recent memory has featured such a terrifically retro maniac or revisited the heyday of Eighties gore films with such gleeful, moist abandon. Hatchet (whose malformed antagonist resembles nothing so much as the bifurcated nightmare from Tobe Hooper's The Funhouse by way of South Park's rendering of Barbra Streisand) is manna from, well, probably not heaven, per se, but certainly some sort of Fangorian paradise. It's smart, too, and although it never quite goes down the meta-horror route of Wes Craven's Scream films, Green and his very game cast keep things lively with a steady stream of genre references (Robert "Freddy Krueger" Englund and Kane "Jason Voorhees" Hodder both show up in substantial cameos, as does Candyman's Todd), quippy dialogue, and a nail-biter's wet dream of endless, inventively gagtastic gore effects – courtesy of John Carl Buechler (From Beyond). All of this is edited to within a freshly flayed maxillary muscle of its life (or death) and set to a driving, tonally perfect orchestral score by Andy Garfield. The story itself is a crafty variation on the genre's hoary theme of young outsiders growing up to wreak vengeance on teenage hoi polloi, which imbues the proceedings with an instant sense of homey, if gooey, familiarity. Buddies Ben (Moore) and Marcus (Richmond), celebrating Mardi Gras in New Orleans, sign up for a "haunted swamp tour" along with a group of other, more disposable special-effects-to-be, and end up pursued by the aforementioned bayou freak show. It's simplicity itself, really, and Green is to be congratulated for keeping the proceedings as uncomplicated as they are. It should, by this point, be apparent that Hatchet is strictly for gore and genre enthusiasts only – matrons and Medveds likely will end up gibbering in the aisle should they attempt a viewing. Why this sudden resurgence in ultraviolent horror, à la Hostel, Saw, and Black Sheep? Call it wartime catharsis; call it the cinematic shards of a zeitgeist's shattered mirror; call it the Reagan Years Redux; call it whatever you choose. Just don't call it squeamish. Hatchet II
There's a hatchet-wielding psycho in the Louisiana swamps. So what else is new? 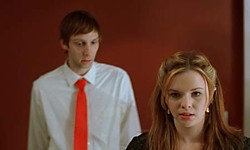 Spiral
Portland-based creeper about a lonely painter and his muse/potential prey was a big hit at last year's Fantastic Fest.