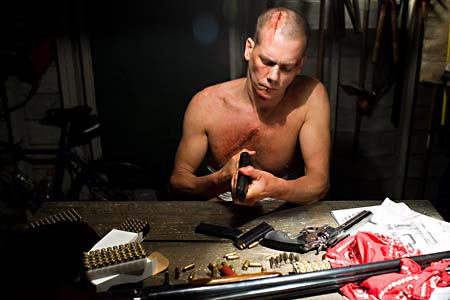 Vigilantism is alive and flourishing in Death Sentence, the new revenge thriller from Wan, the so-called Splat Pack director of the original Saw movie. The story is loosely based on a 1975 novel by Brian Garfield, the author whose 1972 novel, Death Wish, was the source material for the the classic dad-on-a-rampage movie of the same title. This sequel of sorts implicitly condemns vigilante acts: Instead of settling scores, the retribution only leads to further acts of violence on a vengeance scorecard that has a bottomless tally line. Every victim leaves behind someone to make things right. But it's not this moral that's front and center in Death Sentence so much as the trappings of violence. Bacon plays mild-mannered insurance executive Nick Hume, who turns into a Travis Bickle wannabe when his eldest son is murdered by gangbangers. Hume can ID the killer, but, disgusted with the justice system's willingness to cut a deal that would earn the murderer only a few years in prison, Hume decides to drop the case and settle things eye-for-an-eye style, out of court. Eradicating the guilty gangbanger does little good since even the lousiest scum apparently leave behind aggrieved family members. Thus, the lives of Hume's wife and youngest son (Preston and Garrett) become endangered. Tyler, as the detective on the case, looks on in silent disapproval, seeming to know what Hume is up to but lacking the evidence to nail him for it. Revenge movies such as this could not exist were it not for the slack inefficiency of the police force and justice system. Bacon's kinetic acting style serves the role well, even though his transition from risk-assessment wonk to death-defying dad is rather unbelievable. Goodman is the acting standout here in a tiny but most memorable role as a gun dealer: It's another role in which the actor's dominant physicality is intrinsic to the character. One well-staged sequence in a parking garage is the film's only other memorable moment. The graininess of the film generally makes everything look as ugly as it feels. Death Sentence deserves no reprieve.