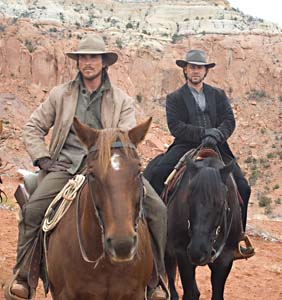 Westerns and remakes are two film categories whose reputations have sagged in the modern age of moviegoing. 3:10 to Yuma is the movie that puts the lie to these presumptive myths: This film is an example of a Western that ought to appeal to a healthy-sized contemporary audience and is also a remake of the 1957 film of the same name, which is a hallmark of the type of psychological Western (i.e., High Noon and Shane) popular 50 years ago. Director Mangold is best known for his most recent film, Walk the Line, though his career choices have veered all over the map, from his bracing indie debut film, Heavy, to the hysterics of Girl, Interrupted and from the dark genre piece Cop Land to the fantasy romance of Kate & Leopold. In the end, perhaps this scattershot approach has prepared Mangold well for tackling this giant from the past without trepidation or slavish idolatry. His 3:10 to Yuma is just different enough and yet faithful to the original (which is based on a short story by then-young Elmore Leonard) to score a success. Casting Crowe and Bale, two of the finest actors around, as the story's two central characters is a coup. Crowe's reputation for drawing in crowds has taken something of a beating with his recent film choices (A Good Year, Cinderella Man, Master and Commander), so his turn here as self-serving Ben Wade, the leader of a vicious gang of stagecoach-robbing outlaws, is no sure thing. Yet he infuses the character with just the right mix of violent menace and tender intelligence to make the character believably complex (that is, at least until the absolute final minutes of the movie, during which sentimental and preposterous actions on Wade's part trump all pretenses of believability). Bale brings his usual intensity to the role of Dan Evans, a rancher who's hobbled by the area's lack of rain, as well as an old Civil War injury. Additionally, his inability to feed his hungry cattle and family makes him feel inadequate as a man. When an opportunity to earn $200 by helping to bring the serendipitously captured Wade to Yuma to board the 3:10pm prison train, the usually reluctant-to-get-involved Evans seizes the chance. Fonda is practically unrecognizable in his excellent performance as a gruff Pinkerton man, and Foster brings an electric energy to his role as Wade's sociopathic second-in-command. Apart from the final minutes of the film that strike its only false note, 3:10 to Yuma barrels down the track at full force.