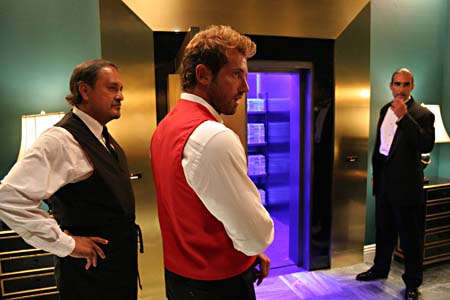 In case you were wondering, Robin Hood is alive and well and currently sneaking across the border into California. His name is Emilio Lopez (Varoni), and though he may be an illegal immigrant and lifelong criminal, like the English archer before him Emilio chooses (on occasion and when the mood strikes him) to use his skills to steal from the rich and give to the poor. The rich, in this case, is Moctesuma Valdez (Lisazo), an Argentine millionaire living in Los Angeles who makes his money stealing from the poor and giving to himself, hocking miracle cures – for baldness, obesity, even cancer – to trusting immigrants new to the United States. Looking to exact revenge on Valdez for making a fortune exploiting the vulnerabilities of the newly transplanted and homesick, Lopez and his partner in con, Toledo (Colunga), decide the most poetic approach would be to assemble a team of immigrants whose very invisibility makes them ideal hustlers. In Los Angeles, after all, who’s going to notice one day laborer more or less? And who makes a better thief than the person no one ever bothers to see? So they grab a valet here, a gardener there, then add a car mechanic and a political refugee – and not a single con artist among them – and train them to do what they already do best: go unheeded. It’s an ironic conceit that distinguishes Ladrón Que Roba a Ladrón (a title taken from a Latin American proverb that says, "A thief who steals from a thief will receive 100 years of forgiveness") from your typical heist film. Ocean’s 11 might be funnier and more glamorous; The Sting might be more dazzlingly convoluted. But Ladrón is aiming beyond the limits of the genre to say something about the larger world of the modern American immigrant experience, while at the same time reveling in the simple joy of a well-conceived scam. The rare Latin film both set entirely in the United States and shot entirely in Spanish, Ladrón is grand Hollywood entertainment for and about a long-ignored culture that's just now starting to sense the potential vastness of its own economic and political influence. To make an intelligent heist film is difficult work; to shoot an entertaining sociological study is near impossible. To manage both at the same time has got to be some kind of minor miracle. 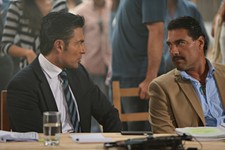