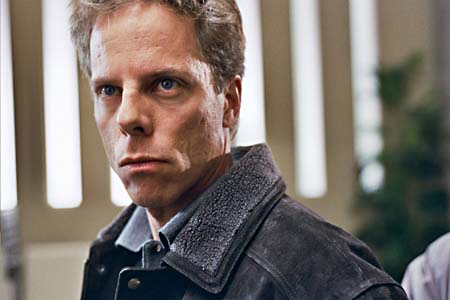 It contains some freshman mistakes, but this made-in-2005 microindie (brought to theatres by the risk-takers at THINKFilm) has such dramatic momentum, such a need to tell its story, that it's well worth a look. Based on true happenings at Utah's Brightway Adolescent Hospital, a "tough love" facility for wayward teens, the film excoriates boot-camp discipline while encouraging sympathy for well-intentioned parents driven to desperate measures. (Writer/director/producer/star Lapica dedicated the movie to his mother.) Seventeen-year-old Andrew (Lapica) is hell on wheels: drinking, smoking pot, ditching school, shooting paintballs at yahoos on the Vegas Strip, and verbally abusing his pill-popping mother (the smoky-voiced Venora), who's been prostrate on the couch in her bathrobe since Andrew's father died two years ago. So when two thugs arrive in the night to haul Andrew off in a van, he puts up a fight like Amy Winehouse. Once on the ward, Andrew is strip-searched for drugs and weapons, deloused, psychologically inventoried, and plunked into group sessions with a sadistic, patronizing counselor (Bowen) who can't wait to ship him off to Brightway's boot camp in Western Samoa. While the teenage self-harmers and dysthymic heroin addicts draw therapeutic pictures, Andrew goes down to the "pit" for solitary standing confinement and hatches a plan for escape. It sounds like a movie-of-the-week on paper, but Self-Medicated has a raw, desperate energy and offers no pat solutions to the problems its characters face, which is a plus. Its teenagers feel authentically teenaged – Lapica was 24 when he made the film – and they are not passive victims of adult persecution, but moral agents in their own right. Neither are the adults monsters: Venora's grieving-mother characterization is somewhat cliché, but she owns it, and Germann adds dimension as a sympathetic but powerless counselor. Lapica, who turns in a fierce performance as his own star, doesn't always hit his mark quite as well behind the camera, however. The film suffers from televisiony fade-outs, dialogue scenes too heavily soundtracked, and the third-act arrival of the now-stereotypical magical black man, in the form of a jovial homeless guy (William Stanford Davis) who doesn't even want the money Andrew offers him – only a chance to cheer him up and discuss masturbation briefly. Yet even when it is inelegant, Self-Medicated is a compelling small-scale drama, and Lapica is a talent to watch.