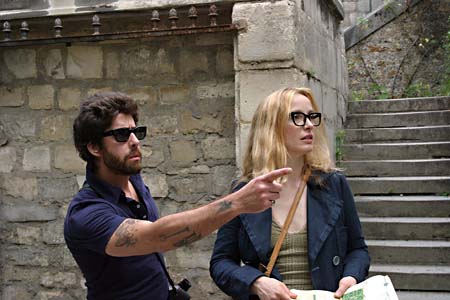 2 Days in Paris is a romantic comedy of manners that is funnier and more perceptive than you might initially expect it to be. That's because in addition to it marking the actress Delpy's feature-filmmaking debut, Delpy also co-stars in the film as well as being credited as the film's producer, scriptwriter, editor, and music composer/performer. All those tasks would be a lot for a seasoned auteur to pull off successfully, so the ambition seems a mite reckless for a first-timer – even one who has been nominated for a Best Original Screenplay Oscar for Before Sunset with co-authors Richard Linklater and Ethan Hawke. Clearly, the French actress best known in these parts for her performances in Linklater's Before Sunrise, Before Sunset, and Waking Life, has been paying attention while on the sets of the several dozen other films in her filmography. Though Linklater's narrative influence is apparent in 2 Days in Paris, Delpy brings a more humorous and caustic sensibility to her time-encapsulated vision of a romantic holiday. Here, instead of the near-magical lovers' rapport experienced by Linklater's characters, Delpy's lovers grow out of sorts with each other when plucked from their shared turf in Manhattan. Marion (Delpy) and Jack (Goldberg), a couple of two years' duration, stop in Paris to visit her parents for two days while on their way home from a trip to the romantic city of Venice. Yet Jack clearly dislikes going outside his comfort zone, and seeing Marion in her home town – where she keeps an apartment upstairs from her parents (who are played by Delpy's real parents, Marie Pillet and Albert Delpy) and old lovers lurk around every corner – causes Jack to see his girlfriend in a different light. It's not simple jealousy that erupts but something more subtle: Evidence of details Jack thought exclusive to their relationship turn up with these ghosts from Marion's past, and signs of her unhinged temper flare uncontrollably when encountering a hateful ex or a racist cabdriver. Jack, a curmudgeonly worrywart, is no prince either but, as played by Goldberg (who is becoming one of the finest comic actors of his generation), is a hoot to watch as the boundaries of his comfort zone are constantly assaulted. The film's third act goes off course a bit, but, overall, Delpy the filmmaker shows a lovely sense of comic timing and visual play. 2 Days in Paris provides a smart and funny respite from most of what passes for romantic comedy these days. 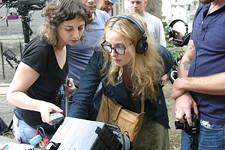 Dynamics Dysfunctional and Otherwise
Julie Delpy on '2 Days in Paris' 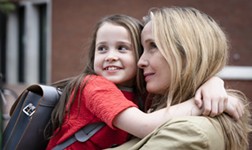 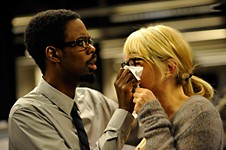 2 Days in New York
This ebullient domestic comedy by Julie Delpy, in which she co-stars with Chris Rock, is a follow-up to 2007’s 2 Days in Paris.