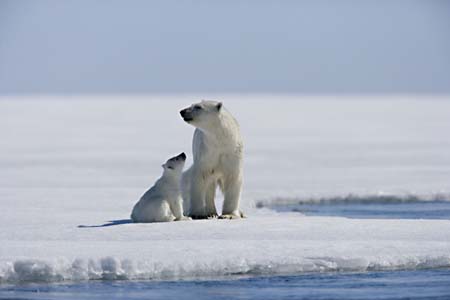 Oh, that wascally walrus calf! There she is with her herd, relaxing on an ice floe beneath a gorgeous arctic sunset after a three-day clam binge (which walrus "mom" and her best pal and protector "Auntie" snuffle up with their "sweet 'staches"), when suddenly the entire group's digestive tracts explode in an 1812 Overture of flatulence, tooting and pooting concussive eruptions so magisterial that it almost levels the mammoth slab of glacial ice they call home. Nutty! Although comparisons between Arctic Tale and 2005's March of the Penguins are perhaps unavoidable, this very well-shot tale of young walrus Seela and her polar bear doppelgänger Nanu (presumably not their real names) is less a traditional National Geographic-style documentary and more a cuddly "See how they're just like us" children's story set beneath the undulating Northern Lights. Filmmakers Ravetch and Robertson spent some 15 years filming various animals in their icy native habitats (including rare footage of a pod of narwhals, the so-called Unicorns of the Deep – something I've never seen before) before crafting the footage into a "narrative" (with a kid-friendly narration, courtesy of Queen Latifah) about the itty bitty walrus and the little polar bear that could. Almost by accident, the filmmakers also recorded some of the first unassailable evidence that the polar ice cap is shrinking as the sea becomes warmer. As the summers grow inexplicably longer and the ice shelf begins to melt and then refuses to reform as it has for thousands of years, both Nanu and Seela face unforeseen obstacles: namely, how to find the summertime food they'll need to store up in their blubber and sinewy musculature to keep them alive during the winter months. To its credit, Arctic Tale isn't a hard sell on the environmental angle (and really, after the mainstream media's recent coverage of a near-disastrous mishap between a massive chunk of calving glacial ice and the British-registered tourist vessel it very nearly capsized, it doesn't need to be). Instead, the film focuses on the anthropomorphization of its animal stars. If it's sometimes a little too pat, a little too cute, bear in mind that this film's target audience is the post-Barney, pre-Bratz set and not John James Audubon. The Earth's offspring, human and otherwise, are still quite literally the future, and Arctic Tale is right to ask its final ominous query: What will the rapidly warming future hold for Seela and Nanu's kids, and, more to the point, what might it hold for ours?