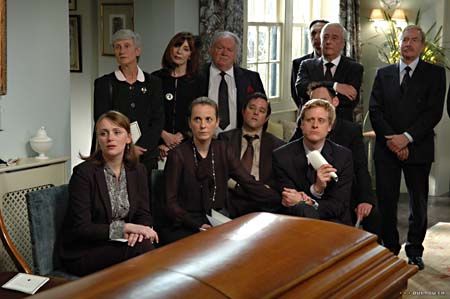 Oz (also known as the voice of Yoda, Miss Piggy, and Fozzie Bear) began his directing career with the not-really-for-kids kids’ classic The Dark Crystal and over the years has successfully turned out bizarre camp (Little Shop of Horrors), classic comedy (What About Bob?), and brilliant satire (Bowfinger). Here he is again, tackling British farce. Take one rolling country house, insert one big extended family, add a touch of personal tragedy, a bit of resentment, and a generous portion of dysfunction. Stir well. The result is Death at a Funeral, a comedy that’s refreshing in its courage to embrace tradition and just have fun. The film spans the course of a single afternoon, during a funeral where everything that can go wrong, does. Macfadyen appears pastier and puffier than the dashing Mr. Darcy he played in Pride and Prejudice. And it works because this time around he’s Daniel, the neurotic son who stayed home, attending to his aging parents while his successful novelist brother (Graves) went off to New York. Daniel’s years of pent-up frustration grow as he learns his brother won’t be ponying up his half of the funeral costs. But that’s just the beginning. As each guest arrives, troubles mount. Daniel’s resentful mother (Asher) continues to drop not-so-subtle jabs at Daniel’s wife (Hawes). Howard (Nyman) must tend to the ultimate in grumpy old men, Uncle Alfie (Vaughan), while indulging his growing hypochondria. Troy (Marshall) merely sees the funeral as a pit stop on the way to sell his latest pharmaceutical concoction. Meanwhile, his sister, Martha (Donovan), drags her milquetoast fiancé (Tudyk) to the service only to accidentally calm his nerves with some of her brother’s homemade LSD. Tudyk (Serenity) is hilarious as the mild-mannered Brit sent on a psychedelic journey. Then there’s Peter (Dinklage), the mysterious guest who turns out to be closer to the deceased than anyone would have guessed. It’s comedy in the good old-fashioned sense: pure farce served straight up. Smartly conceived and executed, the jokes arrive with some cheap shots, but Oz (and Dean Craig’s script) takes everything one step further. And just when you think things can’t quite get any crazier, they do. Though everyone’s problems get resolved too easily, it’s a fun ride nonetheless. And it’s clear that Oz still has plenty of comedic venom to go around. 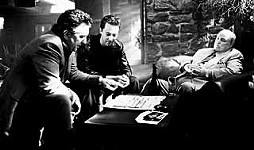 The Score
The possibilities were frightening. No one knew exactly what to expect when Robert De Niro, Marlon Brando, and Edward Norton -- among the three best, ...