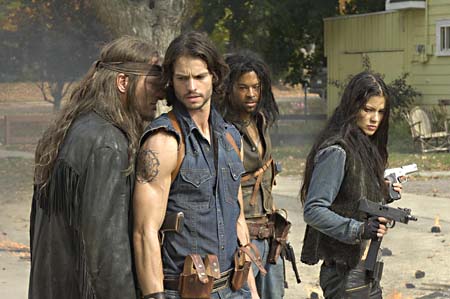 The best thing I can say about this umpteenth retelling of The Trouble With Hairy is that it has a fine one-sheet poster that manages to capture the J-horror fetish for unstable women with unruly hairdos while simultaneously making daring use of trapped white space. Kudos to the ad campaign, but nuts to everyone else involved in this snuffly, histrionic werewolves-at-war-with-one-another yawner. It's as if no one involved in this production has seen or cared to heed the warnings of recent lycanthropic debacles such as Blood and Chocolate, Van Helsing, Underworld: Evolution, or Cursed and has forged on, despite all box-office evidence to the contrary, with yet another subpar, bite 'n' slash PG-13 bloodless-bath. I have a theory: I suspect that for every 13th buzz film that opens in a North American shopping center there must be one truly awful film that features either vampires or werewolves sporting mall-punk-approved pleather (poseur/plastic leather) chaps or dusters. Think about it. The truly transgressive, genuinely disturbing wolf-in-teens-clothing films of the past two decades (The Howling, An American Werewolf in London, even Ginger Snaps) were almost all prebuzz era. Can you imagine Joe Dante directing in a stripey Johnny the Homicidal Maniac long-sleeve T? Me neither. But that's just the audience that Skinwalkers is after, and while there is some notional fun to be had in watching the physically commanding Behr stalk and gnaw his way through scenes – he's the Alpha male of a group of villainous, back-to-nature-on-a-Harley "skinwalkers" intent on snuffing out the prophesied 13-year-old half-blood Timothy (Knight) – it's a far cry from the genre's vulpine, once-upon-a-time, 28th-day lunacy. As it stands (on two legs or four), Skinwalkers is shape-shifters-lite. Fangs, but no fangs.

Dragon Wars: D-War
Based on a Korean legend, Dragon Wars is the fantasy story of a reporter who unearths the truth about catastrophic L.A. earthquakes and sets off to save the city.