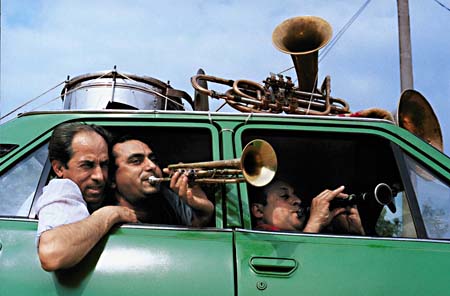 Long ago the ancestors of the Roma left northern India, and they have journeyed ever since. Ten million Roma – or gypsies, a term some reclaim and some reject – still share a language and culture but are settled all over the world. Billed as the “Gypsy Caravan,” five bands travel across America making music from across the Romani diaspora: the traditional music of Maharaja, from India; the powerhouse vocals of Macedonia’s Esma Redzepova, officially dubbed “Queen of the Gypsies” in India in 1976; the flamenco stylings of Spain’s Antonio El Pipa; the festive folk of Romanian ensemble Taraf de Haïdouks (seen in Tony Gatlif’s Latcho Drom and endorsed in the film by Johnny Depp); and boisterous brass band Fanfare Ciocarlia. Documentarian Dellal follows the tour intimately, interweaving footage (some of it shot by the indefatigable Albert Maysles) from the stage and from the road with backstories for each artist in his or her own homeland. We learn that several have brought electricity and relative prosperity to their villages and that making gypsy music is an act of cultural, emotional, and economic survival. Periodically the film’s sound recordist, who is an American Rom, steps in as a foil for the travelers, who vex their tour manager by sneaking off to smoke and fish in the pond outside a coliseum in Ann Arbor, Mich. Backstage the groups have their differences, but over the course of the film, there is a coming-together, based on the shared soul of the music and dance. Whimsical and absorbing, the film offers vibrant performance scenes spliced with thoughtful consideration of the Romani identity. Dellal crafts the stories of key players: Redzepova and her husband fostered 47 children; Taraf’s 79-year-old lead violinist supports a family of grandchildren but is faced with ill health. This is not a concert documentary – it’s rightfully more expansive in scope but may frustrate audiences when Dellal cuts away from a number so that we hear but do not see it – yet there are moments of transcendence onstage, including a jam-session finale. Throughout, the ebullience and passion of the music gives viewers a point of entry into what it means to be Roma, part of an ancient culture in a modern world – including Austin, a stop on the tour. (The 7:50pm show on Friday will be introduced by Dr. Ian F. Hancock, director of the Romani Archives and Documentation Center at UT and ambassador for the world's Roma to the United Nations Economic and Social Council and UNICEF.)