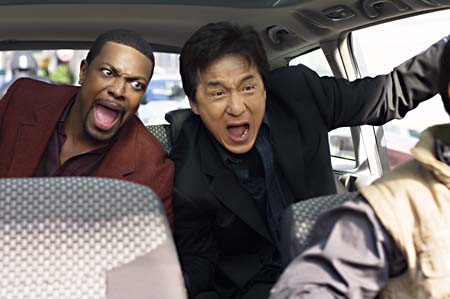 It says something that the most inspired comedic performance in Rush Hour 3 comes from director-cum-fugitive Roman Polanski, whose turn as the head of the Parisian police arrives midway through the film: He and his flunkies torture returning intercontinental buddy cops Los Angeles Detective Carter (Tucker) and Hong Kong Inspector Lee (Chan), hanging them from the ceiling and bashing them about with phone books before going deep-down trauma hound on them with a latex-gloved index finger. It's either the most inspired Chinatown gag ever or a sure sign the diminutive Oscar winner has gone ’round the bend. Either way, this third outing in the series (the last entry wobbled in six years ago) falls flat faster than most of Chan's goofy line readings – he's never quite mastered the idiomatic inflections of Yank slang, and as a result Chan's Inspector Lee always seems half a beat off his patter, making the whole film feel like a Hope and Crosby road movie lodged in first gear. The story, which reunites Lee and Carter as they head to Paris to uncover the would-be assassin behind the shooting of Lee's friend Ambassador Han (Tzi Ma), is a sterling example of how not to make a crisp, surprising action film. It's The Bourne Ultimatum's evil twin, relying, as it repeatedly does, on tired, cookie-cutter, cliché action set-pieces (Chan no longer seems to have the sinewy grace of his younger Police Story-era self, nor is Tucker's pop-eyed, horn-dog cop schtick anywhere near as funny as he thinks it is) and a by-the-numbers script that feels as though it were concocted by writer Jeff Nathanson's son. Even Lalo Schifrin's pounding, percussion-heavy score seems retrofitted from some other, better movie. Ratner, a director not known for his subtlety, understands full well that audiences often enough expect more of the same when it comes to action-comedies of this stripe, but there's a fine line between the frenetic fun to be found in returning to a familiar roller-coaster ride and the dead-end slog of a dying franchise. If only someone had thought to replace the ever-more-annoying Tucker with the ever-more-elfin Polanski, Rush Hour 3 might've mustered some severely warped brilliance. As it is, it just signals a series that's plainly out of gas.