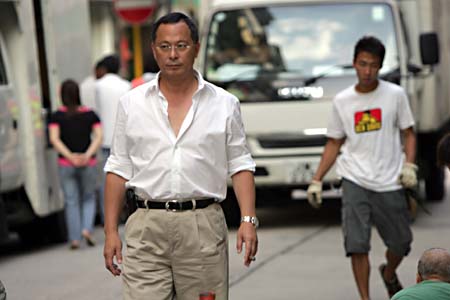 Winner of four awards at the Hong Kong Film Festival, this gangster melodrama is actually a sequel to 2005’s Election. To, who made his international reputation with 1993’s fantasy actioner The Heroic Trio, hews more closely here to the Triad criminal potboiler formula of countryman John Woo: unapologetically sentimental, concerned with questions of masculine honor, punctuated with bursts of violence. To is less grand a stylist, his action stagings more modest; a sort of workmanlike grit pervades the film – bare-bones pacing, moments of almost clinical overhead camerawork, romantic montages of boxing and men shaking hands. There’s also a certain amount of English-language karaoke, including an almost unrecognizable “La Bamba.” Leading man Yam hasn’t crossed over to Hollywood like Chow Yun-Fat, but he’s no less an icon back home; here, significantly, he plays Lok, an aging Triad godfather faced with yielding control to one of his gangland godsons. Jimmy (Koo, a younger staple of the Hong Kong firmament) is the obvious choice, having built a profitable minor empire in pirated porn DVDs sold in mainland China. Meanwhile, Lok reconsiders whether to step down, and a bloody battle for control ensues. The film is a solid gangland drama, infused with a little grandeur (it begins with a nostalgic montage of mainland immigrants arriving in Hong Kong) and some sentimental touches. The godfather of their society possesses an official dragon-shaped scepter – the subtitles called it a “baton” – and in the film’s world this is not a goofy thing to do. The film is also deadly serious about scenes in which Jimmy fantasizes about building a house right there on this hill and embraces his lovely wife, Pauline Pan. But like so many ambivalent gangsters, Jimmy is inexorably sucked deeper into thug life, and the film explodes into violence that is at times intense. (Whereas Woo has his operatic shootouts, To has sledgehammers and attack dogs that are fed a freshly ground victim.) The tone is pointedly bleak, and I was not surprised to read in the press kit that the first sentence of To’s director’s statement is: “In 1997, Hong Kong returned to Chinese sovereignty after one hundred years of British colonial rule.” If it is too stylistically modest to win converts among the multiplex crowd, the film surely rewards followers of the genre. AFS@Dobie 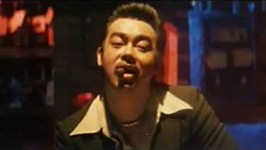 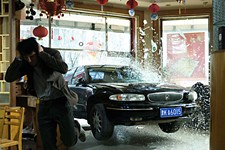