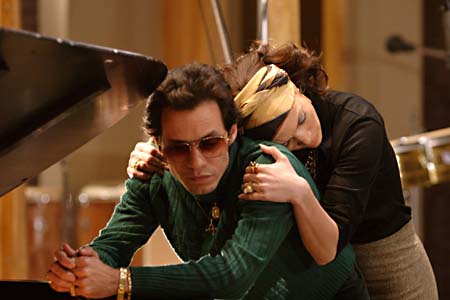 "The more he grew as an artist, the lower he sank as a person," says Lopez as Puchi Lavoe, widow of Eighties salsa sensation Hector Lavoe. The person she's talking about is totally irrelevant, however. It's the formula that counts: the rise-and-fall trajectory that drives every Behind the Music-style docudrama. Unfortunately, there's little more than formula in Ichaso's El Cantante, a biopic about the singer known as Lavoe – or "the voice." His rise from the beaches of Puerto Rico to the pinnacle of New York's rising salsa movement and Nuyorican community is shown as meteoric and trouble-free, his descent into drug addiction and unreliability appears endless and endlessly enabled, the love of his wife Puchi is instant and eternal. So what if the movie skips over all the musician's artistic and personal struggles and misses a great opportunity to reveal historic aspects of Latin music culture? As Lavoe, Anthony comes to life whenever he's onstage and singing, although appearancewise he does nothing to mimic the appearance of the singer but wear Lavoe's signature aviator glasses and feathered hairstyle. Anthony's real-life wife, Lopez, plays Puchi and also produced the film. The couple's chemistry onscreen is real (and erases all fears of another Gigli), but Puchi's constant presence makes the film seem like it's a common love triangle about a man, a woman, and his stash. The screenplay by Ichaso, David Darmstaedter, and Todd Anthony Bello hardly misses a music cliché, which is too bad because Ichaso (Piñero, Crossover Dreams) and cinematographer Claudio Chea create a vibrant sense of period Nuyorican flavor and dance-hall exuberance. Yet significant events in the lives of this couple (such as the death of their son) are rendered unclearly and only add to the sense of having discovered very little through El Cantante. 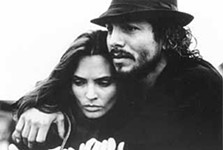