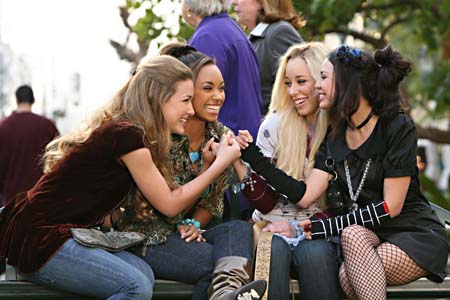 Let’s get past the initial hurdle of accepting a movie that’s based on a line of dolls. (This is the season of Transformers, isn’t it?) These dolls seem to be the epitome of everything today’s tween gal aspires toward: They’re vulgar, oversexualized clotheshorses who irritate their elders. In this live-action film, multicultural BFFs Yasmin (Ramos), Jade (Parrish), Sasha (Browning), and Cloe (Shaye) are actually rather sweet, though their “passion for fashion” is unabated. The film opens on the girls’ first day of high school, as they wake to their alarm clocks in their individual bedrooms and visually link up over their computers to discuss the day’s attire. (They then fish out the items from their walk-in closets. No, I’m not jealous.) The film nicely incorporates modern-day computer artifacts into the plot, as when mean girl Meredith (Staub) carries a tiny flashdrive as a weapon. Meredith is the school’s top dog, and her goal is to divide the student population into smaller packs. And though the Bratz give voice to lofty sentiments, such as “friendship is a big deal,” a quick dissolve to junior year shows that the four friends have drifted apart, having become divided and separated by the school’s governing cliques. Their “bratitude” emerges, however, and they fight back against the cliques and their ringleader Meredith and her proud papa (Voight), who is also the principal of the school. (Voight’s shameless participation in this project could be a whole topic unto itself: the bottoming-out of Oscar winners.) At 110 minutes (including a music video over the closing credits), Bratz is way too long. Yet the full house of tweeners at the screening I attended would probably disagree heartily. I didn’t know I had bratitude before seeing this movie, but … there it is. For all the film’s platitudes about friendship and setting one’s inner voice free, it also supports the coolness of consumer culture and material worth. Still, there’s a filmmaking spark here that riffs on things like imagery from Moulin Rouge and Ennio Morricone's spaghetti western music. So, in the end, Bratz and I won’t be BFF, but we can coexist until the next gal-pal film comes along. 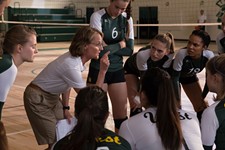