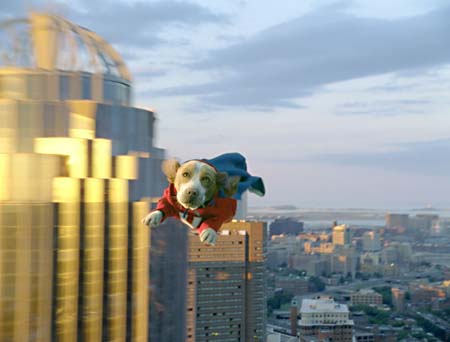 My 5-year-old companion offers his assessment: “I like how they made the old cartoon into a giant new cartoon. I mean, movie.” Disney’s big-screen vehicle for Joe Harris’ kitschy 1964 series has real live dogs, but it’s pretty much a cartoon and not a very kitschy one. Let’s be clear about one thing first: To say that the technology used to make movie dogs talk has improved is not to endorse its use. In this way, talking-animal movies (director Du Chau previously helmed the zebra epic Racing Stripes) are much like nuclear weapons. Yet I never doubted that Lee’s voice was emanating from the rather charming beagle who has been green-screened with a swirling cape and stoic expression. The dog, Shoeshine, escapes the animal-testing experiments of mad dwarf Dr. Simon Barsinister (Dinklage) and meets Jack (Neuberger), Disney’s newest motherless child. As the two bond, Shoeshine realizes he’s imbued with superpowers and compelled to help others – while busting cheesy rhymes, of course. Belushi orbits the film as Jack’s security-guard dad, as if sending signals of earnestness through space. Meanwhile, canine girlfriend Sweet Polly Purebred (voiced by Adams) lands in certain trouble. The elements of the film don’t quite mesh: The villains are cartoony, but Du Chau aims for soggy family drama in his father-son story. The mad-dwarf thing kind of stuck in my craw, as did usually watchable sidekick Warburton, who seems to have been chemically stripped of his personality. I was not impressed with jokes made at the expense of a Chinese hairless crested nor with the poop humor. And the movie’s pro-dog message (“There are no bad dogs, only bad owners”) is as close as it gets to depth, besides generic family messaging and some minor product placement. In many ways, it’s as perfunctory as a live-action family movie can get. But somehow Lee sells it, with an amiable, game-for-whatever performance that is better than it has to be. You can also be certain that Underdog will be shown in a cold, dry room, which is pleasant in the dog days of August.