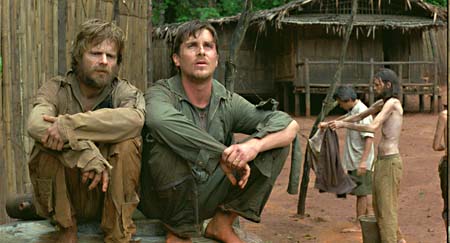 Herzog, the German arthouse film director (Grizzly Man, Aguirre: The Wrath of God) who has adopted America as his home for the last several decades, offers with Rescue Dawn one of the most clear-eyed portraits of the American can-do spirit ever seen on film. Minus jingoism and sentimentality, this Vietnam War-era drama tells the story of Dieter Dengler, a Navy air pilot whose plane was shot down over Laos in 1965 during his very first mission (a black operation conducted by the military in the years before the Southeast Asian confrontation ramped up to full-scale war). The real Dengler, a German immigrant like Herzog, has had his life story told once before by Herzog in a 1997 documentary called Little Dieter Needs to Fly. Captured and held prisoner with two other Americans (Zahn and Davies) and some Vietnamese friendlies in a primitive prisoner-of-war camp by brutal yet ragtag enemy soldiers, Dengler loses pounds but never his cunning and impulse to escape. It would be easy to classify Rescue Dawn as a war movie or POW film along the lines of Stalag 17 or a prison-break film like The Great Escape. To be sure, those elements are there, but Rescue Dawn is not so much a genre film as a drama about American optimism and the challenges of adversity. Dengler does not court heroism like a battered Steve McQueen or Bruce Willis: He is merely a problem-solver and practical joe. His advice to others is simply, “Scratch where it itches.” As Dengler (minus a German accent), Bale (American Psycho, Batman Begins, The New World) continues his masterful command of yet another American personality type. Looking incredibly gaunt, Bale proves himself game for anything as he downs a meal of maggots and skins a snake with his bare teeth. Zahn, in a career dominated by roles as a comedic foil, has never had a dramatic opportunity as good as this one and demonstrates that he is more than capable of the challenge. Meanwhile, Davies, as the deprivation-crazed soldier who long ago passed wit’s end, again shows that he is one of the best actors of his generation. Herzog even manages to mediate the barbarism of the Laotian captors with doses of humanity that find them starving alongside the Americans and equally imprisoned within a jungle fortress that shows no mercy. The jungle becomes as much a character in Rescue Dawn as any of the human players: The way in which Herzog films the countryside makes every leaf and tree root into a friend or foe. Humanity’s double-edged relationship with nature is an ongoing theme in Herzog’s work and can be seen most prominently is such films as Grizzly Man and Fitzcarraldo. Herzog outdoes himself with Rescue Dawn, making his most popularly accessible film yet and proving at the same time that he is among the most daring of all filmmakers and capable – like his characters – of almost anything.