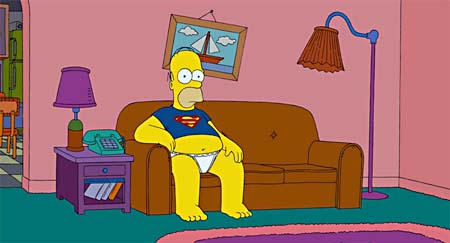 Unless you’ve been living in a cave for the last 18 years or have no sense of humor whatsoever, then you love The Simpsons: Homer (Castellaneta), Marge (Kavner), Bart (Cartwright), Lisa (Smith), Mr. Burns (Shearer), Apu (Azaria). Just the names evoke a smirk and recollection of something hilarious. Through bad seasons and good, The Simpsons has weathered changing tastes, guest stars, and writers to emerge as the longest-running sitcom (animated or live-action) in the United States. We love the Simpsons because they’re crass, ridiculous, and brilliant. And after years upon years of rumors, The Simpsons Movie finally has arrived. If you’re looking for familiar hilarity and some treats you’ll never get on the show, you’ll be a happy camper. If you’re looking for something bold and new, redefining itself to launch on to the big screen, you’ll be disappointed. The movie runs just like a good episode but more fun because it’s longer and just so much bigger. When Homer’s selfishness results in Bart being handcuffed naked to a street sign in the center of town, Bart starts to wander over to the neighboring Flanders (Shearer) for some fatherly love. Meanwhile, Lisa is as active as ever trying to get the town to rally around environmental cleanup. I won’t ruin it for you, but one thing leads to another, and Homer’s left to stop the Environmental Protection Agency from bombing Springfield in order to win back his family’s love. It’s just so hard not to adore these writers (show creator Matt Groening and developer James L. Brooks head up the long list with many of the series’ producing/writing team). Albert Brooks (Finding Nemo) voices the smarmy head of the EPA, while Green Day and Hanks also make appearances. But the real enjoyment lies in the old favorites (though I could always use some more Mr. Burns). Hearing Homer stumble through, "praise Jebus” and celebrating Alaska as the place “where you can never be too fat or too drunk” brought me back to the old days. So maybe it’s not the same anymore. Maybe the movie is just reaching out for something that saw its heyday five (or even 10) years ago. But oh, what a heyday. And I’ll tell you one thing: Homer’s rendition of “Spider Pig” is comedy gold, and the orchestral version that goes over the credits is absolutely priceless. 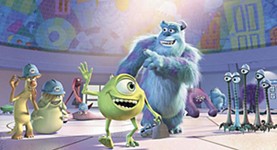