Poor Tim Dwight (Chittenden). He’s got a winning smile but no wit to go with it; he’s polite and respectful but diffident to the point of paralysis. On the phone with girls he stutters and stammers, and in their bedrooms he stumbles around blindly before giving up, throwing on his clothes, and racing home in a panic. When his new girlfriend, Jill (Booth), threatens to leave him, Tim explains the reason for his ineptitude: Both of his parents are entertainers, he confesses, saying the word “entertainers” like you and I might say “prostate cancer” or “Pat Robertson.” His father (Holden) was once a middling pop singer who made a small name for himself as a Conway Twitty tribute act and who is now the security guard at a local grocery store, hanging on embarrassingly to his dreams of stardom by singing syrupy cowboy ballads in old-age homes. Then there’s Tim's mom, Jean (Blethyn), a low-grade stand-up comedian who, like her ex-husband, flirted with fame in her youth and now prowls the cabarets of Sydney, Australia, with her bawdy-homemaker routine about randy women and their overweight husbands, trying to resuscitate a career she’s convinced was derailed because she left London to have her first child and not because she wasn’t talented. Jean’s not ashamed to let Tim and her other son, the mentally retarded Mark (Wilson), know that they place a distant second in her heart to her hopes of stardom, and yet her need for an audience compels her to hold on tight to them both, even if it means choking poor Tim off from his love for Jill. Introducing the Dwights is a difficult film to watch. Ostensibly a comedy, it’s really just a collection of awkward stage performances set off by scenes of familial dysfunction. Blethyn strikes the right tone as the pathologically insecure Jean, but the actress hasn’t been born yet who could make us care for such a woman. As Tim – a character rich in contradictions and psychological possibilities – Chittenden may as well be a cardboard cutout for all the emotional complexity he’s able to muster. And as for Wilson, he hits a new low in the dubious realm of nonretarded actors grinning and flailing their arms about in the hopes of communicating mental deficiency and inspiring sympathy in their audience and recognition from film-award committees. Whenever he’s onscreen, any decent person should be compelled to look away. 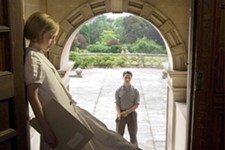 Atonement
Joe Wright has fashioned an epic piece of moviemaking from Ian McEwan’s novel: Starring Keira Knightley, the film is consumed with the nature of storytelling and the moral responsibility of the storyteller. Pride & Prejudice
This fresh adaptation of Jane Austen’s masterpiece starring Keira Knightley presents a witty and lovesick skirmish of the sexes that exceeds all expectations.