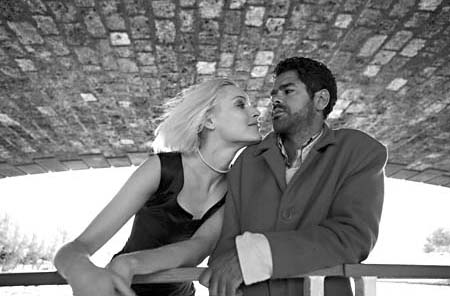 What the hell is going on with Luc Besson? The genius hyperstylist director behind Subway, La Femme Nikita, Léon, and, take it or leave it, The Fifth Element, hasn't stepped behind the camera since 1999's bizarro Milla Jovovich lovefest The Messenger: The Story of Joan of Arc. He's been scripting like mad in the interim, cranking out vivid and brutal Besson-esque actioners (The Transporter, Danny the Dog, District 13, the brilliant and bizarre Wasabi) while simultaneously producing everything from the astonishing Thai import Ong -bak to the astonishingly awful American retread of his own Taxi. (Queen Latifah? Jimmy Fallon? Ce qui la baise, homme?!). I'd blame it on that whole "freedom fries" nonsense, but Besson's sang is way too froid to even consider any fast food that doesn't explode or turn into an alien life-form or, you know, bite your lips off before morphing into an irritated, ordnance-heavy Jean Reno. Supersize that, s'il vous plait." So the man's been busy elsewhere, and now comes Angel-A, a gorgeous-looking but ill-conceived mash note to the city of Paris that riffs on its better, wiser, glaringly obvious cinematic predecessors (Wings of Desire, It's a Wonderful Life) while adding nothing new with this story of André (Debbouze of Amélie), a petty crook with the requisite lonely heart, and the ethereal beauty Angel-A (the leggy, perplexing Rasmussen) who saves him from suicide (the Clarence to Debbouze's George Bailey. Hot dog! Andre, we soon learn, is in debt to the mob up to his beady little eyes, which gives the not-all-that mysterious Angela a fine excuse to drag him to a discotheque where he gets sozzled while she methodically raises a fistful of francs by turning the men's room into her own personal brothel. Paris, Je T'Aime? And how! It gets more gratingly ridiculous – and not in the good, Besson style of old, either – from there, and by the time the climactic la Seine-side finale rolls around, debts paid, hearts healed, you're left wondering where the fucque Reno is and what on earth possessed the professional Besson to fall prey to such an ultimately dull nonaffair. To be fair, Thierry Arbogast's sparkling black-and-white cinematography is a character in its own right; he makes the City of Lights look more ecstatically, erotically rapturous than a Reno/Rasmussen/Jovovich ménage à trois. No small feat, that.