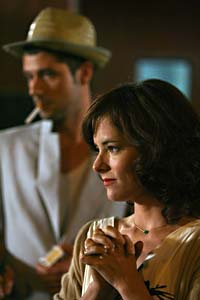 Parker Posey gives a lovely, toned-down performance as Nora Wilder, the single, mid-30s Manhattanite at the heart of this romantic comedy. The role calls on her to effectively utilize more of her dramatic acting chops than are usually on display in the more arch comic roles in which she's usually cast. Nora works as the customer-relations manager in a boutique hotel, and although the job places her in contact with lots of rich, intriguing bohos, she nevertheless feels underemployed and grievously unloved. Yes, she's one more gal looking for sex in the city, and like the women on that HBO show (and soon-to-be motion picture), Nora's circuitous path to happiness finds a Prince Charming waiting at the end of the road. However, before Broken English descends into derivative rom-com clichés (culminating in a direct filching of the ending of Richard Linklater's much better rom-com Before Sunset, missed flight and all), the film's first half provides a delightful and knowing portrait of a woman whose battle with her own desperation offers the possibility of arriving someplace beyond the confines of the genre's prescribed happy ending. Posey imbues Nora with a quiet dignity as her last vestiges of optimism give way to anxiety attacks as her assumed-to-be happily married best friend, Audrey (de Matteo), urges her to get out into the dating pool and her mother (Rowlands, the director's real-life mother) reminds Nora that most of the good men have already been taken at her age. During the first hour, we witness Nora entering a tryst with a self-absorbed actor (Theroux) who's staying at the hotel, finding no matches on an online dating site, enduring a blind date that ends badly, and attending the five-year wedding anniversary party of Audrey and her husband, whom Nora introduced to each other. Then, as she's about to leave the party of a goofy co-worker, she meets Julien (Poupad), a Frenchman in a jaunty straw hat with whom she embarks on a several-daylong fling before he has to return to Paris. With Broken English, first-time filmmaker Cassavetes (daughter of John and Rowlands, sister to Nick and Xan) joins the family business, and her ability to find depths of characterization in otherwise throwaway moments is a reminder of her father's talent. Scenes often rely too much on talk rather than on visual solutions, although there's a languid seductiveness to the film's pace (aided by the score by Scratch Massive). Still, this movie belongs to Posey, and her nuanced performance makes Broken English a worthy adventure. 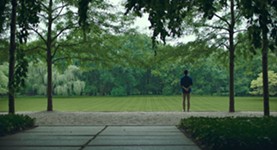