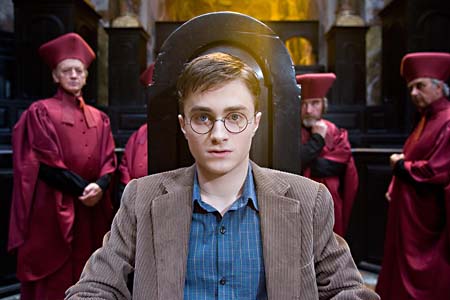 There is a fair percentage, I think, of literary-minded Muggles out there whose chief concern vis-a-vis this fifth film adaptation of the spectacularly popular J.K. Rowling wiz-kids novels lies not with the imminent arrival of He Who Must Not Be Named (and that would be evil Lord Voldemort, not Cthulhu) but with an act of far more hormonal import and sympathy: Harry's first snog. Yes, it's true: Harry Potter (Radcliffe) manages his first kiss, in between all manner of expository storytelling, and never was a young man's wand more ever-ready. This is the first of the eventual septet's volumes to be directed by Yates, and it's also the first to improve, literally, on its source material. Yates and screenwriter Michael Goldenberg pare Rawling's sprawling novel down to its essence and lose none of the novel's quickening urgency. Voldemort (Fiennes, looking like a jauntier version of Pan's Labyrinth's Pale Man) has returned, the Ministry of Magic has been (metaphorically) renamed the Ministry of Denial, and Harry's chief ally and headmaster, Aldus Dumbledore (Gambon), finds himself a mere figurehead as Ministry cat's-paw Dolores Umbridge (Staunton of Vera Drake and the BBC comedy series Little Britain) arrives to dismantle the school's Defense Against the Dark Arts course – much to Professor Snape's (Rickman) seething ire – before going totally Thatcher on the place and neutering it completely. While Harry's relationship with his best friends, Ron (Grint) and Hermione (Watson), remains at the story's fore, it's Staunton's mad-hatter turn as Umbridge that makes the film as entertaining as it is. A vision in pink and violet (much like the innards of a ferret), the aptly named Umbridge marches through the halls of Hogwarts with the steely, grim grin of a true believer plastered to her unflappable, pillbox-hatted facade. She's the archetypal headmistress from Hades, a part perhaps more identifiably British than Yank, but anyone who's ever endured the depredations of a power-mad high school harridan will sympathize and cast in with Harry's beleaguered lot. Thus we get a renegade band of students, led by Harry, secretly arming themselves for a battle they recognize has already begun. Timely metaphors abound in The Order of the Phoenix, but the story (of which there is much) stands on its own magical merits, dark and darker still though they may be. The end may be in sight by now, but we're still not sure if it's a light at the end of this particular tunnel we see or the cold headlamp of some hell-bound train, bearing down on magic and Muggle alike.