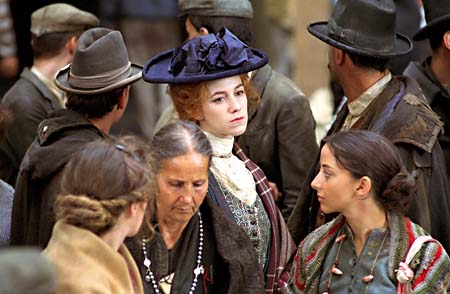 Serendipitously arriving on these shores at a pivotal point in America's love/hate relationship with immigrants, documented and otherwise, the French-Italian co-production Golden Door seeks to remind us that somewhere back in everybody's family is an immigrant or 10. We may be Americans by birthright, here, now, but for the vast majority of the U.S. citizenry, their grand- or great-grandparents risked life and limb to leave the "old country" and start over in this new one. Director Crialese, who helmed the fine, sun-drenched Respiro awhile back, here forgoes the light in favor of rolling fog banks, endless expanses of chilly Atlantic chop, and the unpalatable realities of turn-of-the-century immigration – in this case that of the Mancuso family, who trade their burros and one ramshackle goat in return for passage to America, where money grows on trees and rivers of milk flow throughout the land. (Crialese has fun with his immigrant family's outsized expectations: Characters are seen swimming, literally, in a milky sea, and silver dollars fall from the trees onto one daydreaming fellow.) Led by their determined patriarch Salvatore (Amato), the family – including sons Pietro (Pucillo), a deaf-mute, and his more strapping sibling, Angelo (Casisa); feisty, nihilistic grandmother Fortunata (the excellent Quattrocchi); and a pair of village girls (who add awfully little to the storyline) – the Mancuso clan leaves its unspecified village of origin in Italy to make the hellish Atlantic crossing before ending up at Ellis Island where, illiterate, bewildered, and unable to speak a word of English, they're poked, prodded, and left standing somewhere between an uncertain future and possible deportation. Thank goodness the effortlessly multilingual Gainsbourg's also making the voyage, as a classy-but-fallen gal who'll be needing a husband before she's allowed to disembark on Yankee shores (single women were not looked kindly on by immigration, apparently). And Salvatore, as luck would have it, is a widower. Golden Door's story isn't all that remarkable – the whole sea voyage is merely a means to an end – but once at Ellis Island (where the frosted glass windows don't even allow those fresh off the boat a glimpse of the land they're desperate to set foot on), the ritualistic humiliations, medical and otherwise, that must be endured before being allowed into New Yawk prapah, is scrupulous in its detail. Despite the hardships depicted, Golden Door is a sweet film at heart, playing witness to the birth pangs of modern America with both due respect and the occasional comic grace note, but not, oddly, one single shot of the Statue of Liberty. Respiro
It's the story of a wife and mother living on a Sicilian island, who is prone to increasingly bizarre behavior, and the family who must cope with her.