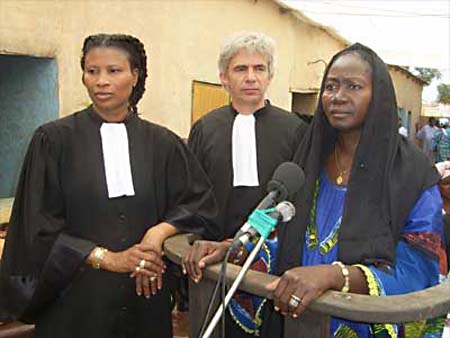 It's safe to say you've never seen a courtroom drama even remotely like this one by Mauritanian filmmaker Sissako (Waiting for Happiness, Life on Earth). Set in the neighboring African country of Mali, the film puts on trial nothing less than the institutions of the World Bank and the International Monetary Fund. From the perspective of those testifying, these American-based organizations have wound up gutting their country's economy and natural resources. Although formed with good intentions after World War II for the stated purposes of regulating the international monetary system and loaning money to developing nations, a restructuring of the debt obligations of poor countries during the Eighties has left millions feeling exploited and abused by the powerful nations of the world. "The World Bank is the Trojan Horse of capitalism," says one. Yet instead of a physical structure, Sissako's courtroom is the open-air courtyard in the midst of a compound of houses in the town of Bamako. Black- and white-skinned judges and lawyers listen to the testimony of the local citizens, while the panoply of daily life goes on around them. Sophisticated arguments are passionately put forward as a group of workers makes batik cloth, a mother nurses a baby, one wedding procession passes, and another marriage slowly falls apart. The beauty of the film lies in these contrasts. Occasionally, counterarguments are proffered by the attorneys, and everyone seems to understand that the entire exercise and the court's ultimate decision will carry no weight in the world arena. Yet, the audacity of putting these institutions on trial is a satisfying provocation in itself. Although the dialogue is challenging, it is not terribly dense. Still the film would be better served if the distributor had letterboxed the subtitles instead of allowing occasional sentences to become bleached out in the bright Malian sun. Also, a couple of seemingly significant songs are not translated at all. Bamako, with Sissako's poetic blend of the humdrum and the theoretical, is altogether fascinating. Dramatic features born and bred on the African continent are rare commodities on these shores, and the opportunities they offer can stretch far beyond film appreciation and into the realm of world understanding. AFS@Dobie

Timbuktu
Jihad in Mali goes from comic to horrific in the blink of an eye.