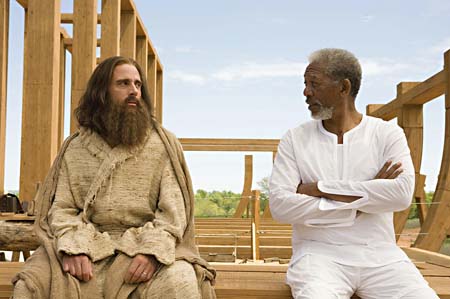 The crowds may respond rapturously to this Bruce Almighty follow-up, but that won't be enough to turn this mild laffer into a divine comedy. Already heralded as the most expensive comedy ever made, Evan Almighty may need heavenly intervention to achieve ultimate financial success. Critical success is even less likely for this modern Noah-and-the-ark story that stars America's current top comic Carell, a host of live animals (in pairs), and a solid supporting cast. Freeman returns in the role of God, who commands a freshman congressional representative (who has just moved with his family from Buffalo to the suburbs of our nation's capital on a campaign promise of "changing the world") to build an ark. Even though God professes to be a big believer in the "one random act of kindness" approach to changing the world, he nevertheless instructs Rep. Evan Baxter (Carell) to build a humongous ark in his back yard (and the seven neighboring empty lots). This time-consuming project, of course, interferes with Baxter's legislative duties, which is just as well since he is about to become the innocent stooge of a boondoggling, corrupt politician (Goodman). There are shades of Hitchcock as flocks of birds begin following him, but they do nothing more menacing than perch on his limbs and scatter droppings as though they were bona fide punch lines. Shadyac, who also directed Bruce Almighty with Jim Carrey, is an old pro when it comes to ignoring the old Hollywood adage about never working with animals, as he also helmed Carrey's breakout film, Ace Ventura: Pet Detective. As in The 40 Year Old Virgin, Carell's hair becomes another set-piece as the modern Noah's hair and beard grow uncontrollably long. (Thank goodness the film leaves out the part of the Noah story in which he becomes drunk and appears naked before his three sons.) Most disconcerting, however, is the opening sequence, which opens the film on a false note. We're shown the final broadcast of Buffalo TV news anchor Baxter before he departs for his new job in Washington. Yet any media outlet would be bound by standards of ethical and equal-time practices to ask for the candidate's resignation immediately after announcing his intention to run for office. Call it a personal peeve, but it's really just one in a long series of bland jokes and lazy contrivances that make up the world of Evan Almighty.