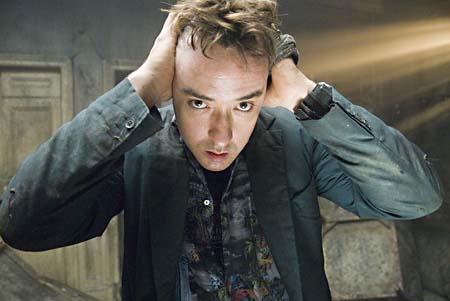 Based on a Stephen King short story that bears a great resemblance to the author’s famous spooky-hotel novel-cum-movie, The Shining, 1408 ranks as one of the best King adaptations for the screen. However, it’s not the script (by Matt Greenberg, Scott Alexander, and Larry Karaszewski) that deserves most of the credit. 1408 is Cusack and Swedish-born director Håfström’s (Derailed) movie all the way. Sure, the fact that Cusack appeared just a few years ago in Identity, another horror hotel movie, raised fears that the actor might have overdosed on one too many Gideon Bibles. Yet 1408 becomes a true showcase for the actor, who appears in every scene – the majority of them as the lone actor in the frame apart from the devilishly shape-shifting shenanigans of the titular room in New York City’s Dolphin Hotel. The other characters are secondary at best: Jackson and Shalhoub have one scene each, and McCormack, in the role of the wife, has only a few more than that. Cusack plays Mike Enslin, a cynical writer (a common King protagonist) who authors books about the supernatural world – books that both exploit the public’s fascination with the occult and debunk our naive sentiments. Enslin appears to have abandoned the novelistic ambitions of his earlier professional years in favor of writing guidebooks such as the one he is currently researching: Ten Nights in Haunted Hotel Rooms, a follow-up to Ten Haunted Houses. He sets his sights on Room 1408 of the Dolphin Hotel, a room so notorious that no guests are allowed entry. Enslin wheedles the hotel manager (Jackson), who adds to the known lore of the five suicides that have occurred in the room by recounting the 50-some-odd other strange occurrences, such as the maid who got locked in the bathroom and gouged out her own eyes. It’s an “evil fucking room,” he says succinctly, in this PG-13’s rare instance of profanity. Once inside the room, director Håfström goes to work, marshaling the suite’s various ghosts and frights to bring Enslin’s cynicism to its knees. The effects are exceedingly well done, while never giving the appearance – which is all too common these days – of being a techno wizard’s wet dream. The movie appeals to an old-fashioned sense of horror, a psychologically based creep-out that again differs from the current horror trend of randomly occurring torture porn. And I guarantee that you will never again be able to hear Karen Carpenter croon “We’ve Only Just Begun” – one of the film’s signature motifs – without letting loose an involuntary shudder of fear.

Escape Plan
Stallone and Schwarzenegger team up for double the fun.