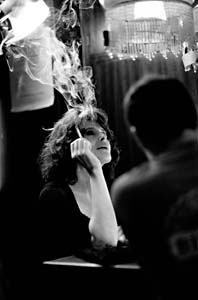 Eighteen short films by an international who’s who of filmmakers make up this omnibus celebrating the joys and sorrows of love and Paris, organized by neighborhood. Filmed in myriad styles, this “collective film” is based on a concept by producer Emmanuel Benbihy and underwoven by Pierre Adenot and Marie Sabbah’s nimble score, which morphs from the bemused pizzicato of Bruno Podalydès’ sidewalk love story in Montmartre to the creepy Bernard Herrmann stylings underneath Vincenzo Natali’s sexy pop-art vampire romp in "Quartier de la Madeleine." Tom Tykwer’s lyrical short film “True” appears here as “Faubourg Saint-Denis”; anchoring the techno fast-motion montage techniques of his Run Lola Run on a standout performance by Portman, Tykwer excavates the charred remains of a relationship. Gyllenhaal, likewise, illuminates Olivier Assayas’ “Quartier des Enfants Rouges,” a gritty handheld slice of life about a heroin-smoking actress abroad that recalls the French New Wave. Sylvain Chomet’s “Tour Eiffel” throws back to Jean-Luc Godard’s jump-cut interviews but dissolves into the giddy story of mimes in love – yes, I said mimes, and you’d have to be a crusty cynical bastard not to be won over by them. A slam-dunk for cineastes, romantics, and Francophiles, Paris, Je T’Aime recommends itself more broadly but for a handful of clunkers. I’m terribly sad to single out Wes Craven’s “Père-Lachaise” for its banal relationship chatter and a premise so cockeyed – that Sewell has no sense of humor, even as he cracks wise, and must be tutored by the ghost of Oscar Wilde – there’s no emotional core underneath. Nor does master cinematographer Christopher Doyle’s Hong Kong-inspired segment in "Porte de Choisy" make a lick of sense, though it’s pretty. Alfonso Cuarón’s “Parc Monceau” carries off its gimmick – a single traveling long take – more successfully by pairing Nolte with a baby. Other highlights include Nobuhiro Suwa’s surreal but heartbreaking segment, which brings a cowboy on horseback – conjured from the fantasies of her dead son – into the middle of Place des Victoires with a grieving mother (Binoche). Alexander Payne’s “14ième Arrondissement” begins as a goof on lumpy, frumpy American tourists (Jacksonville native Margo Martindale) but ends the collection on a sublime, wistful note.