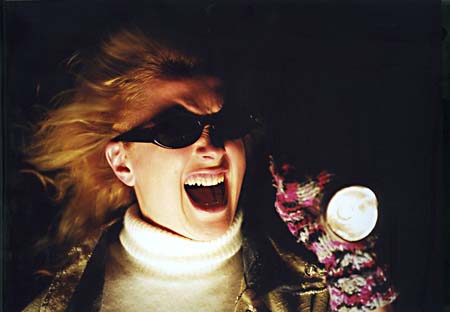 This Russian science-fiction film is the middle work in a planned trilogy of movies based on the novels of Sergei Lukyanenko. Like its predecessor, Night Watch (which played Austin last March), Day Watch is a stunning visual and tonal achievement. Just like Night Watch, however, the elaborate mythos of Day Watch derives from a fairly impenetrable yet ancient battle between the Light Others and the Dark Others, a history that is briefly recapped in the new film's opening prologue but is so perfunctory that it seemingly assumes audience familiarity with the subject. Indeed, no amount of explanation would be able to clarify what has come before and what is to follow. This series takes place in a world that confounds Earth's known physical laws and in which the Others wage their timeless battles while surrounded by clueless mortals. Day Watch has a bigger budget than Night Watch, which has resulted in more CGI effects. (One scene, in which a car traverses the curved side of a hotel, is a particular standout.) The follow-up film takes place a few years after the close of the first and employs essentially the same lead actors and astonishing visual style, although the plot is less coherent and weighted with more supernatural folderol than the original. There's something about the Chalk of Fate, which is something worth possessing because with it one can rewrite destiny. Trainee Night Watcher Svetlana (Poroshina) is especially gifted because she can enter the Second Level of Gloom, while longtime Night Watcher Anton (Khabensky) is in love with her and also struggles with the fate of his young son (Martynov), who has gone to the dark side. The details of the narrative, however, are subsumed to the visual primacy, which comes at the viewer in audacious bursts of body switches, bloodsucking, cataclysmic whirlwinds, and operatic camera moves. Night Watch, a huge hit in Russia, at least provided a window for international audiences to glimpse a homegrown fantasy world. But Day Watch falls prey to the curse of most sequels in which "more" is often a thin concept stretched beyond its limits and misconstrued to mean "bigger and better." 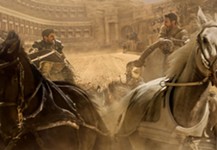 Ben-Hur
We're (unfortunately) off to the chariot races again 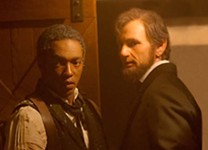