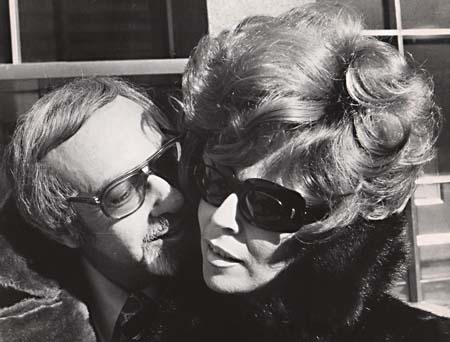 When Bronx beauty Linda Riss met Burton Pugach in 1957, she thought he was “very weird.” She was right. But she loved the flashy attorney anyway, even after he hired assailants to throw lye in her face, disfiguring and mostly blinding her. In fact, it’s after the attack (and his subsequent prison sentence) that their love blossoms most – into a mutually obsessive, interdependent marriage going on 30 years. Co-directors Klores and Stevens spin a documentary yarn that defies belief, yet is true, adroitly meting out the bizarre details that fascinated New York tabloid readers. In one priceless interview, veteran newshound Jimmy Breslin says he never saw someone as “visibly insane” as Pugach outside of an institution. Andrea Peyser of The New York Post compares him to Joey Buttafuoco – unfavorably, even – but despite his “primitive thoughts,” Burt seems to have chased Linda until she caught him. The directors relish footage of the now-elderly Pugachs bickering at breakfast like any regular couple – Linda with her frosted bouffant, king-sized slims, and the ornate butterfly-shaped dark glasses she never removes for us and Burt tenderly helping her into their car – and Linda’s admission that marrying Burt was “the best revenge” for what he did. “He sees what he did to her every single day,” a friend adds. “If it’s a joy or a punishment, I don’t know.” The film’s format is almost entirely driven by interviews, but it’s lively, engrossing, and briskly edited enough to escape the talking-head doldrums, and music supervisor Brian Chin gets ironic mileage from contemporary chestnuts like “Please Release Me” and “You Really Got a Hold on Me” (along with “Linda,” the unofficial theme song). The movie’s quirk isn’t forced; it sincerely ponders the nature of love and of human need, opening with a quote by Jacques Lacan and ending with a shrug: “They say even Hitler had friends,” opines a friend of the family. “What are you gonna do?”