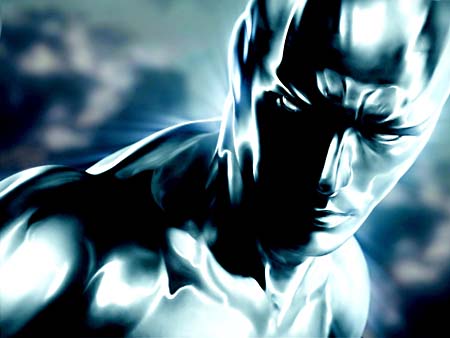 I grew up on Stan Lee and Jack Kirby's Fantastic Four comics. Kirby's bold, almost surrealist art, coupled with Lee's outrageous, epic storylines, was heady stuff, far more invitingly crazed than that sad sack Peter Parker and his webby teen-angst woes. In retrospect, it's impossible to fathom the Fantastic Four of those early years – brainiac scientist Reed "Mr. Fantastic" Richards, his fiancée Sue "Invisible Girl" Storm, her cocksure kid brother Johnny "the Human Torch" Storm, and the grumpy rockslide-on-legs that was Ben "the Thing" Grimm – as anything but a high-minded (and smart, and often very witty) product of the Cold War fears and space-age utopianism that marked early-to-mid-Sixties American pop culture. Compared with that swingin' Spider-Man, the Fantastic Four emerged onto the page as a gamma-ray mutated bunch of wacky, sci-fi squares. (Only the teenage Human Torch seemed likely to hang out in the East Village when not cracking wise at the team's Baxter Building HQ.) Returning director Story tries mightily to top 2005's origin story (which should've been easy considering how wishy-washy the first outing felt) by introducing fanboy favorite the Silver Surfer – voiced with perfect, easy gravitas by Laurence Fishburne and played, under a whole lot of CGI, by Jones (Hellboy's Abe Sapien). As the herald of the Earth's impending demise at the hands of the godlike entity Galactus, the Surfer, who does indeed catch the cosmic waves astride his namesake board, is virtually the only interesting thing in a sequel that has dumbed itself down to grade-school level. The oft-delayed wedding of Reed Richards (the bland Gruffudd) to Sue Storm (Alba) takes center stage and attracts more news-media hype than even the portentous arrival of both old nemesis Dr. Doom (McMahon) and that effortlessly cool interstellar chromium ho-dad. It's not just that the dialogue throughout is a cringe-worthy mix of postmillennial hepcat and Fifties-era science-fiction gobbledygook, either. (You kind of expect that with these particular heroes.) Despite a wealth of well-designed CGI battles and a real attempt to create a sense of the impending threat to life as we know it, Rise of the Silver Surfer is both relentlessly dull and curiously bombastic. Not once does it approach the Lee/Kirby intellectual thrill ride of Marvel's glory days. Flame off.