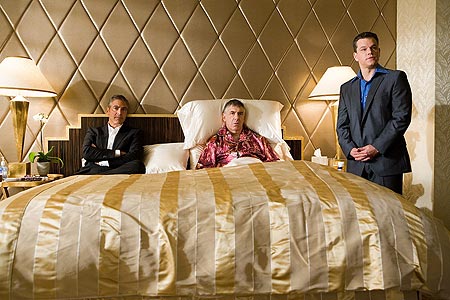 Three films in, and Soderbergh’s Ocean’s franchise has settled into a kind of hipster equanimity – happy to live in that loosely defined territory where art meets commerce and story blends seamlessly with cool. 2001’s great Ocean’s Eleven single-handedly revived the moribund “guy-ensemble film,” which had its glorious renaissance in the Sixties and early Seventies, spanning the time between The Magnificent Seven and The Sting. Ocean’s Twelve followed three years later and set new standards for Hollywood self-indulgence and embarrassed everyone involved, including its audience. As a sort of mea culpa for that disaster, now we have Ocean’s Thirteen, which is either a winning return to form or a complete retread of the first movie, depending on your point of view. I see it both ways: On the one hand, it’s good to see Danny Ocean (Clooney) and his pals back in their native Las Vegas, an environment that’s not only the perfect backdrop for their kind of swingin’ banditry but also allows Soderbergh – a brilliant and underrated cinematographer (often working under the pseudonym Peter Andrews) – to indulge his passion for saturated color palettes and stylized dissolves; at times his reds and yellows look like they’re going to burn through the celluloid and burst out into the theatre. On the other hand, Ocean’s Thirteen is a victim of its own pedigree. The joy of Ocean’s Eleven was in realizing at the movie’s end that its heroes were blessed with such superhuman foresight that they had had every contingency of an impossibly complicated heist accounted for long before anyone in their crew even set foot onto a casino floor. Watching that movie was like listening to an old war story told years after the fact, when all the drama and unpredictability of real life has been ironed out and forgotten, and all that remains is a perfect legend unblemished by obstinate reality, starring 11 supermen who can do no wrong. Now that we expect that kind of criminal omniscience, however, the magic is gone. What’s the point in fretting over Ocean’s chances of getting even with Pacino’s egomaniacal casino boss, Willie Bank, when you know going in he probably arranged for the manipulation of the card-shuffling machines and seduced female members of the casino’s staff into being on his payroll – that God himself is most likely on his team (maybe He’ll show up in Ocean’s Fourteen)? No … better just to sit back and enjoy the ride.