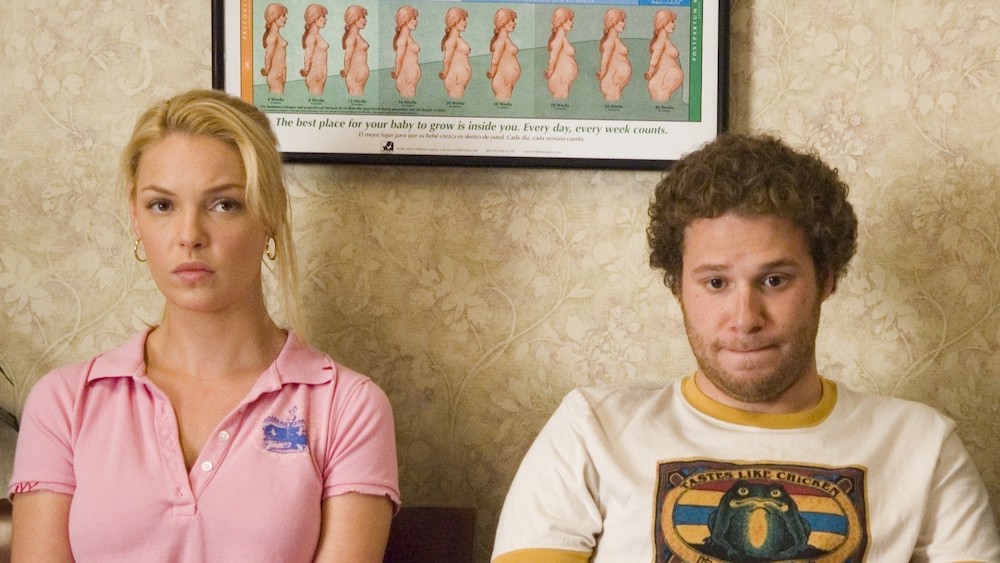 The attraction that exists between wisecracking, hirsute Jewish males and reserved, statuesque gentile females is one of Western civilization’s great wonders, a sociological anomaly that causes thousands of otherwise agnostic wisecracking, hirsute Jewish males to rush off to synagogue each year and give thanks. Ben Stone (Rogen) is such a male: a scruffy, round-faced, good-natured schlub who uses his deadpan wit as a defense mechanism against a world that often doesn’t put much stock in being scruffy or even good-natured. To give Ben some friendly cover, writer/director Apatow surrounds him with a juvenile band of like-minded slackers, played by actors from his cult-favorite TV shows Freaks & Geeks and Undeclared and his 2005 movie, The 40 Year-Old Virgin. (Like Preston Sturges, Apatow prefers the comfort of a stock company of comedy players.) Together they form a pack of disaffected modern-day Peter Pans who sidestep the responsibilities of adulthood by pretending they don’t exist, which isn’t hard to do when your brain is stuffed with marijuana smoke and movie trivia. Ben’s right at home in this shambolic world: He’s got the cleverest put-downs and the largest catalog of pop-culture knowledge, and he’s the most adept at using a gas-mask bong. So when he meets Alison (Heigl), a beautiful, blond, buxom, impossible dream of a woman, and unwittingly impregnates her during a one-night stand, it’s clear his introduction to the world of adult accountability is going to be messy. Like most of Apatow’s work, Knocked Up walks a perilous line between sarcasm and sentimentality, and though it’s extremely funny in bursts, the movie flirts once too often with schmaltz before toppling into melodrama in its third act. The fault lies as much with Apatow’s casting as his writing. Rogen may have a gift for deadpan one-liners, but he doesn’t have the skills to carry a movie with this many emotional peaks and valleys: Laugh here, weep there; regress then, grow now; smoke this joint, raise that baby. It’s a heavy load for any actor to carry, much less a one-trick pony like Rogen. Interestingly, the actor who might have pulled off the role best was already a part of the cast: Rudd, who plays Alison’s brother-in-law, Pete, strikes a tone of snarky indifference and disappointed self-awareness that would have been a perfect fit for the reluctantly heroic Ben. As amusing as he may be, Rogen was born to be someone else’s comic sidekick.