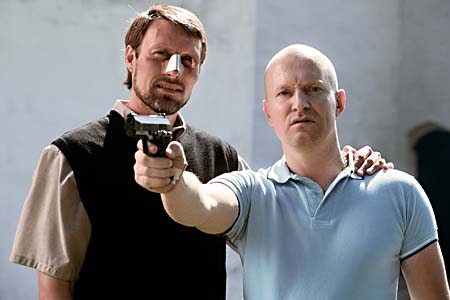 This Danish comedy, like most of that country's dramas, is dark, dark, dark. The film's humor offers an odd blend of subversively sly narrative mixed with bursts of sudden, sharp violence and goofy slapstick. A commercial hit in Denmark, Adam's Apples is now inching its way across North America. Jensen's sacrilegious story forces the viewer to feel empathetic toward the burly skinhead Adam (Thomsen) and scornful of the willfully misguided preacher Ivan (Mikkelsen). From the first second we see Adam as he debarks from the bus that drops him off in the countryside spot that is to be the location of his court-mandated community service, and when he keys the bus as it drives away, we know that Adam is an aggressive troublemaker. At first, Ivan, the minister for whom Adam must perform his community service, seems a decent spokesman for God, a charitable sort who is so confident that there are "no evil people" in the world that he doesn't even recognize a portrait of Hitler when he sees it. But gradually, we discover that this man of God, who believes that humankind is locked in a constant struggle with Satan, manages to bend all the dark realities he encounters into sunny storylines. Ivan's other wards at the church include a kleptomaniac (Bro) and an Afghan thief (Kazim), who robs gas stations as a political protest. Adam soon takes it upon himself to break the priest's morale (and nose), to evict this resident of the fool's paradise in which he lives. Certainly, there's an allegorical level to Adam, the wormy apple tree he's supposed to tend, his Bible that always opens to the Book of Job, and the car radio that always plays the Bee Gees' "How Deep Is Your Love" (with its lyrics about "living in a world of fools"). Adam's Apples is a follow-up to writer/director Jensen's equally dark comedy The Green Butchers, although he will probably be most recognizable to American audiences as the scriptwriter of such Dogma 95 classics as Mifune, Wilbur Wants to Kill Himself, and Open Hearts. His wry humor is a welcome addition to that austere aesthetic movement; however, his droll observations may be a tad too dry for wide-scale consumption. 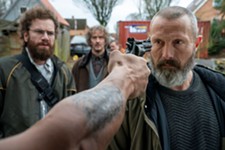 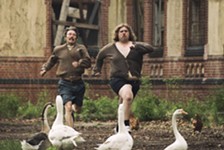