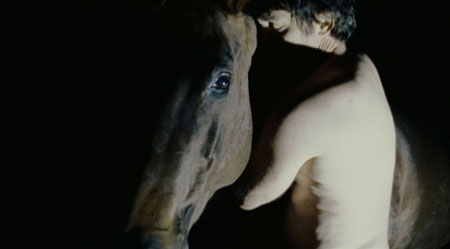 In an attempt to divest his film of the potential salaciousness of its subject matter, Devor (The Woman Chaser, Police Beat) has applied a contrarian approach: He has overlaid the film with a lyrical impressionism that drains Zoo of any possibility to titillate. While the effort might indeed be admirable, the strategy proves ineffective, rendering Zoo a noncommittal muddle that sheds little light and clarifies nothing. Of course, the subject matter – interspecies sex, specifically man-horse sex – is tricky. Director Devor and co-writer Charles Mudede (a columnist for Seattle's The Stranger, whose "Police Beat" column provided material for Devor's last film) base Zoo on the events surrounding the notorious "Enumclaw horse incident" of 2005, in which a man died from internal bleeding caused by a ruptured colon acquired while having sex with a stallion. When the man – referred to in the film only by his Internet screen name, Mr. Hands – is left at the hospital, a security camera traces the license plate to an Enumclaw, Wash., horse farm where a group of zoophiles regularly gathered for parties. It's no accident that these zoos, as they call themselves, convened there, as bestiality didn't become illegal in the state of Washington until after this incident. Understandably, Devor and Mudede, as Seattle residents, grew tired of all the widely broadcast jokes and righteous indignation and wanted to make a film that dealt fairly with the men (and they were all men) as human beings with uncommon – indeed taboo – desires. Although they managed to gain audio recordings of several zoos talking about their memories of Mr. Hand, most of the zoos were understandably reticent to appear on camera. Thus Devor fashions his documentary with re-enactments in which only two of the real participants appear, while all the others are played by actors – something we don't learn until the closing credits. Yet the actor stand-ins are not really the problem here but rather the limited amount of depth the zoos' aural musings provide. The film goes so far in one direction to be compassionate and understanding that it shies away from any hard questions or answers. And speaking of hard things, Zoo refrains from showing any sexual activity but for a blurry couple of seconds caught on a video monitor in the police station. Visually, Devor and cinematographer Sean Kirby create a dreamy, lyrical, half-seen aesthetic that seems as much interested in the mountain scenery as the taboo violators. The opening scene of the film shows a light emerging from the darkness of a mining tunnel and then frames the zoos in shadowy light for the rest of the film. Yet an actor selected to play a cop is suddenly shown interviewed against the glaring white light of a studio setting. Time and again, Devor sabotages his own attempt to bring "zoos," literally and figuratively, into the light. AFS@Dobie