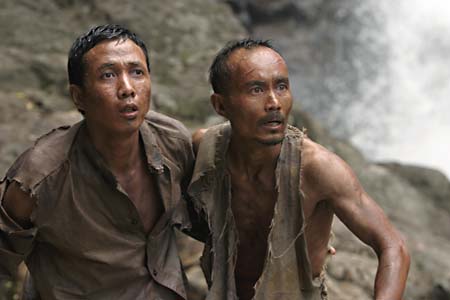 Journey From the Fall

The fall referred to in this title is the fall of Saigon on April 30, 1975, when the last American troops and diplomats left South Vietnam for good. For Americans, the Vietnam War ends there, with those last frenzied images of the foreigners and the few fortunate Vietnamese who helicoptered out from the roof of the American embassy. For the South Vietnamese who remained in the now-reunited communist country of Vietnam, the end of their civil war meant the beginning of a whole new life. Over the years, hundreds of thousands of "boat people" escaped to the U.S. and other countries, while the vast majority who stayed to fight or acquiesce to the new regime found themselves dispossessed of their homes and possessions and often sent to re-education camps from which tens of thousands never re-emerged. Journey From the Fall is an emotionally moving film that presents the story of the Vietnam War aftermath from the perspective of those who once called themselves Vietnamese. As the aftermath of the Vietnam War has been an infrequent subject of American movies, the perspective of this film made largely by Vietnamese-Americans becomes all the more compelling. Journey From the Fall uses the story of one family's experience to typify the whole. As Saigon falls, Long Nguyen (played by Long Nguyen) sends away his wife (Lien), son (Nguyen Thai Nguyen), and mother (Chinh) while he stays to fight. He is quickly sent to one harsh re-education camp after another, while his family steadily makes its way from relocation camps to a boat journey and eventual resettlement in California, battling depression, dehydration, pirates, and outsider status all the way. Although based on true incidents, the combined events make for a highly melodramatic story, but there is also a poetry in the way the tale is told with lush imagery and fragmented time sequences. A popular Vietnamese fable that bookends this first-time filmmaker's movie may have the effect of distancing more Americans than it draws in, but once the film gets going there is no turning your back on it.