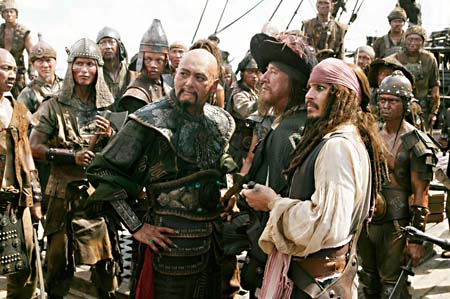 Pirates of the Caribbean: At World's End

Like The Flying Dutchman, this third Pirates outing is an empty vessel haunted by the ghosts of its sabre-rattling betters. Its 168 minutes of increasingly wearying exposition make Renny Harlin's garishly overwrought dreadnaught Cutthroat Island seem like a model of restraint, but then again, only a fool would want to restrain Depp, an actor who's at his best – as he is, mostly, in the Pirates films – when seemingly left to his own creepy-cool devices. Verbinski's in on the joke, of course, the gag in question being Depp's portrayal of the pirate Jack Sparrow as Keith Richards on a rummy Dramamine bender, and so this film's meta-moment introduces us to an unnervingly familiar Capt. Teague played by – who else? – Keith Richards. Which, of course, is great fun, as is Chow's turn as the entirely scrutable Capt. Sao Feng (dig that goatee!). It's well past the time, however, that something humorously unwieldly (a blue whale, perhaps) should fall from the sky and obliterate Bloom's endless variations on the "white bread" theme that constitutes his acting chops in the Pirates films. Depp, as ever, is the sole human component of the film. Securing his release from Davy Jones' arid locker in time to attend a pirate conclave (convened to figure out what to do about Hollander's crazy Lord Beckett, whose righteous zeal for pirate-slaying has gone round the bend and then some) makes up a good chunk of the many-tentacled, twice-told tales herein. The apocalyptic sea battles override the Knightly/Bloom nonromance, of course – nothing holds your gaze quite like a galleon or two circling a maelstrom, except maybe Nighy's tentacled, oh-so-Lovecraftian puss. While At World's End is no The Curse of the Black Pearl, it's also not as stylistically landlocked as Dead Man's Chest. Like Captain Jack, it's a knockabout, scattershot affair, much fun on a Saturday afternoon but hardly as entertaining as Captain Blood or, dare I say it, Muppet Treasure Island.