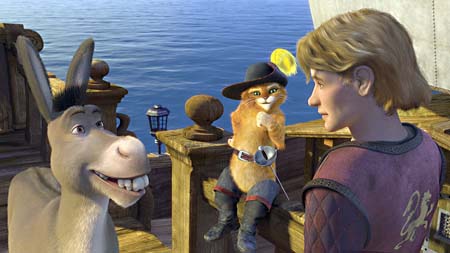 Shrek, DreamWorks' big, green cash machine, has finally run dry, perhaps not of box-office power, but most assuredly of the caustic, fractured fairy tale-isms and the wry, snarky wit that made the first film, and to a lesser degree, the first sequel, so winning. Shrek the Third begins with the death of the Frog King of Far, Far Away (Cleese in a too-brief cameo), an ill-omen for the ogre Shrek (Myers), who not only has to contend with the unpalatable notion of suddenly becoming a royal (you get the idea that Shrek's politics are Labour through and through) but also with the strain of impending – and apparently unplanned – fatherhood. As soon as his beloved Princess Fiona (Diaz) announces the proverbial mucous-green bun in the oven, Shrek ships off in search of Fiona's cousin Artie (Timberlake), with an eye toward solving his pressing peerage problems. In his absence, the vapid Prince Charming (Everett), previously jilted by Fiona and now reduced to doing dinner theatre, stages a palace coup with the assistance of fairy tales' greatest villains, chief among them Captain Hook, the Evil Queen, and Rumpelstiltskin. Chaos ensues, though not amusingly so. Shrek the Third is a colossally unsatisfying mess of a movie, with at least one too many storylines for its own good and barely a belly laugh in sight. At the packed preview I attended, there were more temper tantrums than giggles emanating from the peanut gallery and a sort of grudging acceptance of the concept of film-franchise entropy from Mom and Dad. Murphy's wisecracking donkey is simply an ass here, and Banderas' swashbuckling Puss in Boots, the highlight of Shrek 2, is barely used here at all. Given the choice between sitting through yet another tot-mandated home viewing of Madagascar or Ice Age (or even, dare I suggest it, any of Walt Disney's classic animated features), parents will be better off firing up the DVD player and steering well clear of this plodding, unfunny disappointment.

Puss in Boots
As infectious as the latest viral cat video, this animated film has the added slam-dunk of Antonio Banderas purring the voice of the title character.