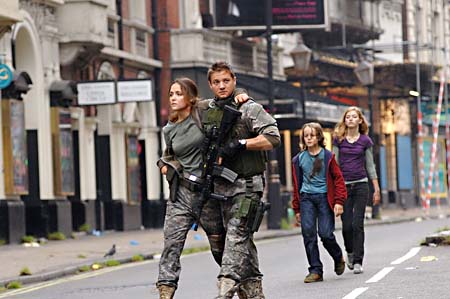 I have forgiven Robert Carlyle. For Eragon, that is. I'm still not too thrilled about his worldly turn as a the bullet-in-the-head Bond baddie back when the world was not enough, but with 28 Weeks Later, a sequel to Danny Boyle's 2002 DV guerilla zombie film 28 Days Later, Carlyle behaves so monstrously and makes the red-foam-flecked most of his character Don. In Boyle's wickedly DIY prequel, a lethal, highly communicable "rage virus" turned most of the citizenry into bloodthirsty savages, while the film smartly riffed on everything from contemporary fears of unchecked biogenetic engineering to the steadily eroding popular trust in No. 10 Downing St. (not to mention 1600 Pennsylvania Ave.). As in real life, things are much, much worse now. London is dead, and the zombified hordes have eaten everyone in sight and finally starved to death. So what do you do when you've got a city in ruins and no discernible infrastructure, mounds of charred bodies and blackened lorries stewing in the streets, and nothing even resembling a functioning society? You send in the U.S. military, who, as current events daily demonstrate, have had more than their fair share of government-sanctioned practice in getting the job done, meter by bloody meter. Enter Special Forces sniper Doyle (Renner), who, although he and his men have been assured the plague has died out, discovers, along with Don and his young son Andy (Muggleton), that viruses are hard to kill. There's a Children of Men vibe running through 28 Weeks Later that has something to do with the boy possibly carrying a genetic resistance (and, therefore, antidote) to the rage virus, but from the moment dodgy dad Don meets up with the wife he left to certain death in the film's first reel, you just know that a crimson tide lurks around the bend. It gets worse, of course, with the core message being "never trust an American with a gun who says he's here to 'help' you" (or similarly obvious antiestablishment ethos). But 28 Weeks Later, with its panic-paced sequences of graphic, random violence and a narrative thrust that rockets along just shy of the speed of terror, has more up its sleeve than either a jab in the eye with the short, sharp stick of a not unimaginable pandemic situation or its more obvious (and less exciting) outbursts of outright horror. Director Fresnadillo directed a fine meditation on luck called Intacto several years ago, and while 28 Weeks Later ultimately falls shy of classic status (it's no Panic in Year Zero!), there are several hard-to-shake scenes – nightmare visions, really – that reveal the infected populace to be far less dangerous to the fabric of a civilized society than, perhaps, the very notion of civilization itself. 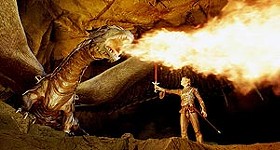 Eragon
Dear George Lucas … It's bad enough that you've cloaked your true identity behind that of the 15-year-old bestselling novelist Christopher Paolini, but did you have to remake Episode IV all over again? With friggin' dragons?!