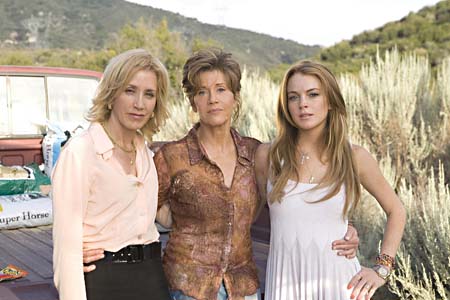 Despite the presence of three acting powerhouses – Fonda, Huffman, and Lohan – this movie about three generations of "difficult" women never rings true. It's a dramedy whose blend of melodrama and humor is awkward and incongruous, leaping between the two modes like a fat frog jumping lily pads. The performances are all excellent, but the screenplay by Mark Andrus (As Good as It Gets and Life as a House) strands these characters with untenable personalities that veer between sympathetic and shrill with nary a missed beat. Lohan is cast as the willful teenager Rachel from San Francisco, whose alcoholic mother, Lilly (Huffman), and stepfather (Elwes) park her for the summer with her with her grandmother Georgia (Fonda) in a small Idaho town rife with Mormons. There's no love lost between Lilly and Georgia, whose life is governed by self-imposed dictates referred to as "Georgia rule." Rachel behaves like a Lohan clone, partying and misbehaving to such an extent that her exasperated family does not know what to do with her. (As you may recall, this is the movie that earned La Lohan a warning letter from the studio for her tardiness and other unprofessionalisms during the shoot.) Strutting around Hull, Idaho, in her oversized sunglasses, skimpy clothing, and stacked wedges, it's not long before Rachel has the largely Mormon town in a dither. She behaves like a brat, but then suddenly turns incomprehensibly sweet in a following scene. This repeatedly dichotomous behavior, we learn, is due to a dark secret that, of course, becomes exposed, and, in turn, throws the entire family into a dither. Yet, Rachel's mother and grandmother are as dramatically malleable as the girl. Georgia can in one instant yell at Rachel to go "fuck" herself, and in the next, wash her mouth out with soap for blaspheming. Lilly can drive all the way from San Francisco to Idaho in high heels and unwrinkled silk couture. Still, the three actresses have their moments and are usually enjoyable if not believable. Mulroney, Elwes, and Hedlund – the male eye candy – are no slouches either, and Fonda is surely the best-looking grandma on the planet. Director Marshall (Pretty Woman, Runaway Bride) usually has a surer hand with these kinds of happy-ending dramedy mash-ups, but films such as his execrable Exit to Eden and disappointing Raising Helen prove Marshall has his downside. With this film's top-notch acting ensemble, Georgia Rule has the sad taint of what might have been.