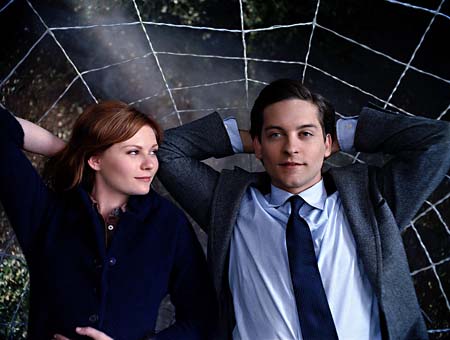 Ever since 2004’s Spider-Man 2 became one of the rare sequels that bested its predecessor in terms of narrative originality and visual audacity, expectations have run high for this third entry in the series. Having defied the odds once, perhaps it was unrealistic to hope for a three-peat. Sadly, Spider-Man 3 in no way (except budget) surpasses the movie that came before it; like Icarus of myth, Spider-Man 3 may have attempted to soar too close to the sun and melted some of its infrastructure in the process. The movie still thrills and captivates but is overstuffed with story fragments and earthbound dramas that have been inserted but then treated like second-tier guests at the film’s real party: its gravity-defying heroics. The numerous chases and rescues that bob and weave through the skyscrapered air space of Manhattan have been stunningly rendered by director Raimi and cinematographer Bill Pope. However, screenwriter Raimi (who co-authored with his brother Ivan and Alvin Sargent) is not on such sure footing when it comes to the pedestrian dramas of Spider-Man’s human counterpart Peter Parker. Maguire as Parker/Spider-Man has an atypical modernist moment in his opening voiceover. He stands outside a movie theatre that’s showing a Spider-Man film and assures us that things in his life are peachy: He’s famous (despite remaining incognito), still at the top of his class, and in love with the girl of his dreams, Mary Jane (Dunst). In short order, his love life becomes complicated when Mary Jane is fired from the Broadway show she’s supposed to open in (this hitch in her career doesn’t forestall the movie from slowing down a couple times to hear her warble a tune), and Parker is too wrapped up in Spidey’s adventures to notice. For comfort, she turns to their old pal Harry (Franco), who also has a second identity as the New Goblin – an adversary of Spider-Man's until amnesia makes him conveniently forget the feud. Amnesia?! But there are many more adversaries for Spider-Man to battle. There’s Sandman (Church), whose molecular processes are a wonder of movie magic; the lingering injustice of who killed Uncle Ben; the new upstart photographer at the newspaper (Grace), who also comes into contact with the goop from outer space, which, of all the moving vehicles in the world, attaches itself to Parker’s motorbike and turns humans it comes into contact with to the dark side. Instead of his red-torsoed spider suit, Parker soon wears a black-chested one, and the space goop turns the human Parker into a jerk in a dramatically primitive sequence that has him strutting down the avenue Saturday Night Fever style, snapping his fingers at the babes and combing his hair forward in a downbeat emo mode. This is the dark side? In short, there are way too many storylines here, especially for a movie that turns stiff whenever it’s on the ground. When cascading through the cityscape, Spider-Man 3 still makes us gasp with delight, but on Earth, those gasps come solely in reaction to the cynical dreariness of the script.