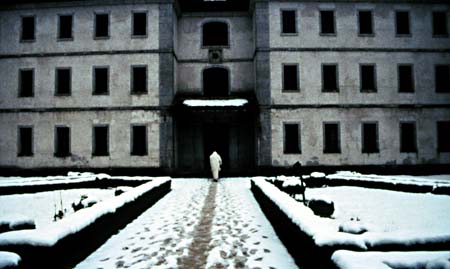 So sonorously meditative as to be something of a federally scheduled soporific, this remarkable 162-minute documentary on the Carthusian monks of the French Alps – who have taken a vow of silence that lasts as long as they do – is a profound and hauntingly beautiful glimpse into a stratum of religiosity few laypersons will ever encounter. It also, at first reckoning, borders on the absurd, seemingly flirting with Monty Python & the Holy Monks territory. But director Gröning, who patiently and penitentially waited some 16 years to secure ascetic permission before embarking on his aesthetic documentary project, is nothing if not fully immersed in the lives of his subjects. Working with an unobtrusive camera, Gröning seeks the furthest reaches of faith, and what he discovers is beautiful, hypnotic, comforting, and, yes, bizarre – a lifestyle so far removed from what we would call ordinary as to be itself sublime in its murmured chastening. As they go about their daily prayers (and yes, they do sound an awful lot like one of pop-synth sensation Enigma's more obscurantist club tracks), puttering in their gardens, chopping vegetables for meals, and (Quentin Tarantino will be pleased to note) distilling their (in-)famous liqueur, Chartreuse ("So good they named a color after it"), the monks are akin to annointed outcast insects, moving through a semi-darkened, hivelike hallways that open up into vast sunlit chambers. It's all beyond reason, though, and since Gröning is uninterested in exploring the history and motivations of these various men – we never learn, for instance, why anyone would want to join up with the monks in the first place – what we are left with is the sensation of having brushed close to the divine or, possibly, the mad. At once eerie, picaresque, evocative, and utterly alien to the reality most viewers inhabit, Into Great Silence is a daring and breathtakingly constructed documentary dream. So much so that the more restless among us may find themselves nodding off.