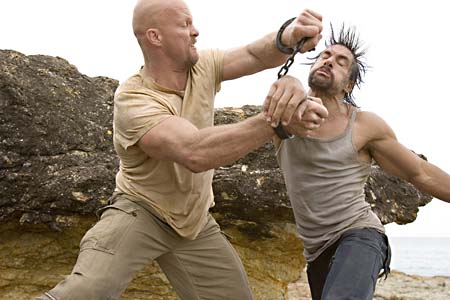 Ten death row inmates from Third World prisons. One South Seas island. Thirty hours. Twenty ounces of plastic explosives strapped to various legs. Two screenwriters. One retired wrestler (Austin, no longer “Stone Cold”). One impalement. Two rapes (one attempted, one offscreen but audible). $49.95 for Internet subscribers to watch it all on a reality series produced by one Hollywood slimeball (Mammone). Millions tune in. Two others: a crazy Special Forces motherfucker (Jones) and the high-minded producer’s girlfriend (Mussett), who balks at the show. One FBI agent (Luke Pegler) who won’t drop the case, even when ordered. And dozens of explosions, approximately one per every six minutes of screen time. In between, an earnest newswoman (Angie Milliken) asks us to please think of the children, and someone or another remarks on how violent entertainment wouldn’t sell to millions of people if they weren’t bloodthirsty bastards, and aren’t we really all to blame? Then writer/director Wiper cuts back to a scene of torture he’s devised for us. It’s as effective an indictment of electronic voyeurism as Sliver. Those intentions aside, The Condemned isn’t terribly effective as an actioner, either, despite a certain promise latent in its island-prison premise. Wiper doesn’t exploit the possibilities of his setting, so the only conflict is the fighting; the only suspense comes from waiting for the next character to pop out from behind a tree and do something possibly interesting. The Japanese prisoner (Masa Yamaguchi) can do a sort of cartwheel in place, which is cool, but mostly he just sneers, being the Japanese prisoner. Several fight sequences are shot handheld, which has the effect of obscuring the choreography, and they’re terribly chopped up into an MTV montage. Meanwhile, Austin’s soft-spoken but tough mien (“Get yourself together,” he tells a man with a broken leg who’s just seen his wife raped and murdered) needs more of a hook for the big screen, and Wiper isn’t giving it to him. The guy who ends up the star is Hoffman, as a wisenheimer co-producer – unlike much else in the movie, he’s got personality.