This may be a remake of a Swedish film from 2002 (itself based on a novel), but unspooling in the cineplex it feels more akin to one of emo godhead Conor Oberst's more emotionally mopey musical diversions. Weirder still, director Goyer is the pen and brains behind the fine Batman Begins, which can be viewed as the darker gaze to The Invisible's oh-so-bright eyes. Seemingly tailor-made for the dispossessed teen within us all (or at least the one who loiters around Hot Topic on the weekends, if and when they finally finish pimping that difficult MySpace profile), Goyer and screenwriter Mick Davis take a crazy gambit, teen-angst clichés and all, and almost make it work, thanks to a pair of better-than-you-might-have-hoped-for performances from Chatwin and Levieva. Sensitive teen writer-type Nick (Chatwin) spends much of the first act asphyxiating on widowed mom Harden's upper-crust apron strings. It's not much of a role for the once and future Miller's Crossing moll, to be sure. Brooding bad girl Annie (Levieva) enters Nick's life after she mistakenly identifies him as the snitch who tipped the coppers to her late-night Tiffany's smash ’n' grab. A future candidate for Faster Pussycat, Kill! Kill! Redux, she accidentally offs the hapless poet-boy, which leads to his spending the rest of the film in a discorporeal state – Dead Like Yeats, you could call it – as he struggles and hollers and generally acts up in the hope that someone will discover his corpse isn't dead. Yet. Surely the pitch meeting read better than that summary, but still, that's about all there is to it, with a third act that borders on the pedantic and cloying. It's all about redemption, grasping the imperfections of all those bruised teenage (and adult) egos, and the possibility, however remote, of achieving some sort of grace by film's end. Director of photography Gabriel Beristain (Blade II, The Ring 2) turns in some superlative, atmospheric work, aided and abetted by the production's nicely oppressive Vancouver locales, but geez, let's face it: Teen angst is teen angst whether it's DOA or MIA, and c'mon, if you really want to go all Swede-emo on us, you're always going to run up against the immovable cinematic woegasm that was Ingmar Bergman. Never a smart move, that. 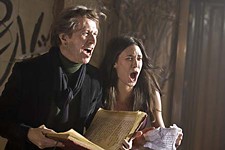 The Unborn
A young woman is possessed by the spirit of her twin brother who never made it to term in this film directed by esteemed horror writer David S. Goyer. 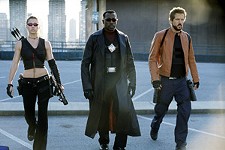 Blade: Trinity
Originality is in as short supply as shirt buttons as Snipes' high tech vampire slayer meets up with what appears to be a steroidal Eurotrash pimp playing Dracula.