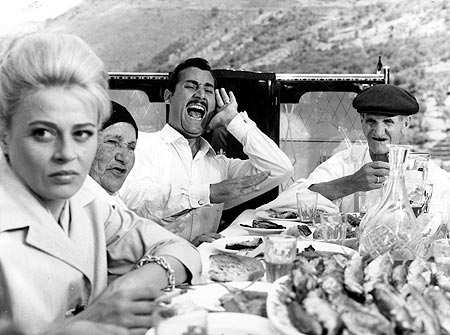 Mafioso, a genius Italian comedy shading toward the darker aspects of its title, has been plucked from obscurity and given a sparkling new cleanup job (its first since the original release in 1962) by Rialto Pictures, whose staff deserves a big fat cannoli for their efforts. Not only is Mafioso historically important as one of the first Italian films to deal with the concept of the Sicilian Cosa Nostra – it's also a brilliant feat of sustained comedy that roves across the Italian and comic geography from Neopolitan pratfalls to bleak unsettling Sicilian existentialism. As shot by director of photography Armando Nannuzzi, Mafioso overflows with gritty, neorealistic splendor, but everything, including Piero Piccioni's note-perfect score, is done in support of the magnificently entertaining Sordi as the voluble, multitasking family man Nino Badalamenti, a Fiat factory head who takes his Northern, cosmopolitan wife and their two blond children to visit the paternal in-laws down Sicily way. Needless to say, the city spouse finds the ways of the country altogether backward (and what's up with that mustache on sis?), while Nino finds himself in thrall to the local don (Attanasio). I'll not spoil the absolute delight of Mafioso by saying more, although I will say that this is the sort of masterpiece that will obliterate memories of lesser, later efforts in the "meeting the parents" comedy lineage. Brilliant. AFS@Dobie