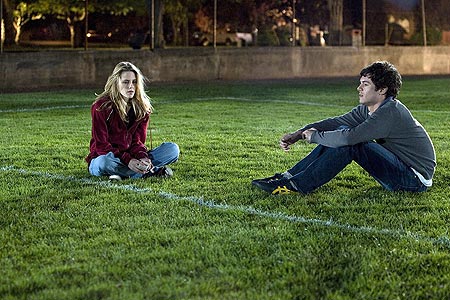 In the Land of Women

Despite a title that makes this movie sound as though it might be the latest madcap offering from Pedro Almodóvar, In the Land of Women is a much more conventional affair – a tame yet appealing melodrama about finding oneself that is alternately formulaic and unique. The OC’s Brody here gets to break out of high school and play his own age – even if it’s only the ripe old age of 26. Playing an older variation of his too-cool-for-school nerd, Brody is this movie’s drifting soul loose in “the land of women,” which, in this case, is somewhere in suburban Michigan. In the movie’s opening scene, Brody’s Carter Webb is dumped by his supermodel girlfriend (Anaya). An aspiring L.A. screenwriter, he cranks out scripts in the meantime for softcore-porn films, which turns out to be the kind of work he can do just as well in Michigan, where he goes to stay for a while with his batty grandmother (Dukakis) and “regroup.” While Dukakis mostly delivers schtick, Carter becomes involved with a mother and daughter who live across the street. “Women,” his mother (Williams) tells him in one of the opening sequences, “have always been drawn to you.” Mom (Ryan) has just discovered a malignant lump in her breast, and daughter (Stewart) is suffering the thorny affects of adolescence and emergent sexuality. They are forever taking him aside and saying, “I want to tell you something.” (If only getting to know people was this straightforward in real life.) Carter pines for his ex, while fluctuating between moments of mature insight and immature impulsivity with the neighbor women. Ryan effectively scales back her winsome girlishness for this role, while Stewart is believable as an adolescent who has not yet grown into her beauty. In the Land of Women is the second feature to emanate this month from sons of film director Lawrence Kasdan. (Jake Kasdan’s The TV Set is yet to arrive in Austin, although it premiered during the Austin Film Festival last fall.) This first film by writer/director Kasdan reveals him to have a good ear for dialogue and the foibles of growing into adulthood. With the inclusion of greater originality in his plotlines, he should grow into a director to watch.