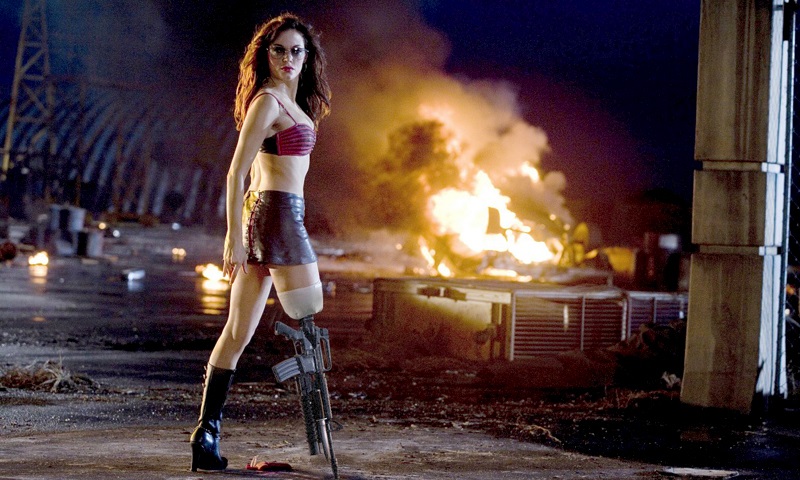 More than just a fun three hours at the movies, Grindhouse is a total immersion into movie geekdom, in which the packaging, marketing, lore, and accumulative experience are as much a part of the deal as the images that are up on the screen. If they could, I suspect Rodriguez and Tarantino would design their own grind-house movie chain of theatres that would re-create the urban scuzz-holes of the past, which ran cheap movies nonstop – a usually eclectic mix of exploitation, horror, and action films, as well as a random assortment of top studio product that had seen better days and more intact prints. As it is, Grindhouse is an homage to an experience rather than any certain type of film, and with its two separate feature films – “Planet Terror” by Rodriguez and “Death Proof” by Tarantino – a host of tongue-in-cheeky trailers by the likes of Rob Zombie, Edgar Wright, and Eli Roth; scratches and notices of missing reels intentionally inserted into the prints in order to heighten the illusion of the celluloid’s sprocket-weary authenticity; a splashy two-for-the-price-of-one marketing campaign; and enough cast members to keep the talk-show couches on permanent rotation, Grindhouse raises the bar for a certain kind of movie lollapalooza (and also for the kind of filmmaker who is also a showman, along the lines of a William Castle or Cecil B. DeMille). It’s this injection of playfulness and fun and attention to the entire moviegoing gestalt that will probably become Grindhouse’s lasting contribution to movie history rather than any on-the-screen content of the movie itself. Ultimately, “Planet Terror” and “Death Proof” are as transient and expendable as the movies they ape (which is meant as a tribute to their authenticity rather than a put-down). Of course, by now, everyone in Austin knows that Grindhouse was filmed here last summer, and part of the local fun will derive from the sight of and references to familiar locations in Tarantino’s section, whose first half is set in Austin. First up, however, is Rodriguez’s “Planet Terror,” a zombie barrage that begins with some pus and guts and builds to an all-out Armageddon between the humans and zombies. Rodriguez again proves that he’s a brilliant action director, making those of us who wish he would give at least equal attention to his scripts seem churlish for desiring more storyline when he’s able to invent a set-piece as good as that of a leading lady who has a machine gun for a leg (McGowan). Tarantino’s half is harder to judge within its Grindhouse context, as “Death Proof” is practically two discrete movies in itself – the first part a talky jamboree of girls’ night out and the second a gloriously staged car chase/vengeance film, which plays like a demented filmmaker/fan’s love offering to stuntwoman Zoë Bell (who is showcased here doing her own stunts) and the non-Disney career of Kurt Russell (who plays a badass called Stuntman Mike in both "Death Proof" segments). Following the zombie rampage of "Planet Terror" and the crazed momentum of the whacked-out trailers and fake ads, the detail-rich dialogue of Tarantino's girls-night-out segment becomes an unfortunate victim of the adrenaline-fueled madness that precedes it. Then an abrupt change of place and characters, linked only by the centrality of Stuntman Mike in both segments, leads directly into the near-wordless muscle-car mayhem that consumes the second half of "Death Proof. " I imagine that somewhere down the line we'll get to see "Death Proof" and "Planet Terror" as stand-alone DVD releases with lots of extras, which is the point at which we'll get a better handle on how Tarantino's film plays without the pacing predicament of this combo release. Grindhouse holds a wealth of opportunities for potential DVD releases in the future: Don't be surprised to see whole movies spun out from some of the trailers or characters (Trejo's Machete and Poitier's Jungle Julia seem likely candidates) or a special directors' cut version that restores the missing reels and "remasters" out the splices and scratches. Rodriguez and Tarantino are nothing if not inexhaustible masters of movie revivification. (For more about Grindhouse, see p.56 of this week's Screens section.)