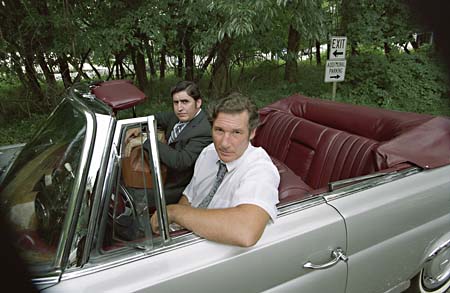 This is the story of Clifford Irving. Born in 1930, the son of a syndicated comic-strip artist; a promising writer at 30, less so at 40; husband to at least four women, illicit lover to God knows how many others; a literary con man and convicted felon who scammed a million dollars out of the McGraw-Hill publishing house and paid for his transgressions with a prison sentence and a poison name. Was there ever a guy whose life was more tailor-made for the movies? The Hoax begins with Irving (Gere) in 1970, despondent after a series of critical and commercial failures has left his career in a ditch. He’s desperate for recognition, so he sells his skeptical editor (Davis) on the idea that he’s sitting on “the most important book of the 20th century”: an authorized, tell-all autobiography of famed billionaire and aviator Howard Hughes. Seeing the stunned looks on the faces of the McGraw-Hill executives when they hear the news, one can safely assume that the notoriously reclusive and enigmatic Hughes was the white whale of the publishing business in the 1970s: ungettable and unknowable, a creature of rumor and conjecture whose capture on the page would be worth any pain or price. Of course, Irving never actually met Hughes and was never dubbed his biographer – which would probably pose a problem for most writers. But for a born con artist like Irving, coming up with the idea was the hard part; talking his way to that advance check, forging memos, concocting interview tapes, stealing files from the Pentagon, making up cloak-and-dagger stories, and generally conjuring a life out of thin air? Just a Sunday stroll. Like 2002’s Catch Me If You Can, The Hoax is the story of a life built on lies. Unlike Steven Spielberg’s film, though, which concerned itself almost entirely with the cat-and-mouse game between its two heroes, The Hoax follows the thread of all of Irving’s lies, not just the ones that led to the White House or the Watergate Hotel. Because Irving lied to everybody, even when he didn’t need to, and his punishment – much more painful than a year in the pen – was ending up alone. The Hoax isn’t Gere’s best movie (that honor will always and forever belong to Days of Heaven), but it might feature his best performance. Observe him during his boardroom mythmaking sessions, when his eyes begin to light up with possibility and just the hint of a knowing grin curls his lips, and you’ll see the pure joy of a man giving in to his most narcissistic, megalomaniacal instincts. What more could an actor ask for from a role?