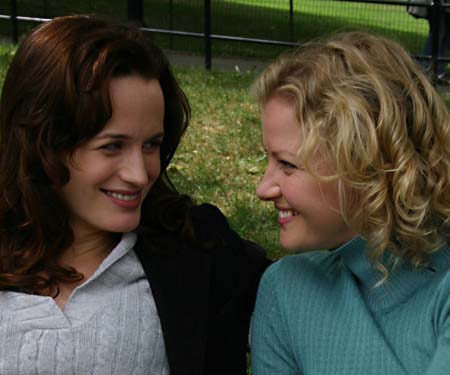 Watching Maggenti's latter-day screwball comedy made me pine for Adrienne Shelly, the former Hal Hartley ingenue whose tentative, restive warmth and skewed beauty – not to mention her artistic and directorial gifts – were cut short by her murder last year. Shelly's endearingly loopy, wide-eyed style was immensely appealing and her naïf persona belied a bedrock core of honest, believable humanity. She would have excelled, I think, in the role of the opera-loving, commitment-phobic Manhattanite Allegra, but Reaser pulls it off just as well. It's an unfair, impossible comparison, but still, Maggenti's romantic comedy of errors has much in common with Shelly's quirky directorial debut, the overlooked Sudden Manhattan. Emotional disconnection in the heart of the big, naked city is at the core of both films, but of the two, Maggenti's is the more accessible. Maggenti takes her lead from the antics seen in the classic screwball comedies of Thirties-era Hollywood and updates them slightly by making Allegra a lesbian who gets dumped by her longtime lover Samantha (Nicholson) and promptly falls into a relationship with both a man – the urbanely droll NYU philosophy professor Philip (Kirk) – and a woman, Grace (Mol, last seen in the altogether as The Notorious Bettie Page). All of them are on the rebound. The premise of a romantic triangle a la lesbiana is pretty reliable, and sure enough, Puccini for Beginners is a rom-com charmer made up of equal parts Sex and the City sass and Woody Allen-lite repartee. Its vision of Manhattan as an island of lost souls (spiritually presided over by, one assumes, Dr. More!) roaming an urban jungle where true love is always around the next corner and every girl needs to either settle down or take her inner manimal out for a walk is fair enough (What cinematic city isn't like that? Alphaville. Okay. You got me there.), and all three leads turn in fine, exacting performances while offering wry if obvious commentary on the ever-kooky state of L-U-V love in the Big Apple. New York Dolls aphorisms aside, Puccini for Beginners' straightforward storyline might have benefited somewhat from the instinctive inner cynic that Shelly brought to her roles (her characters generally found love to be (Richard) Hell, coming in spurts if at all), but Reaser is no slouch in the emotionally befuddled whirlwind department herself. In the end, it's all la dolce vita no matter how you look at it. (See austinchronicle.com/gyrobase/Issue/story?oid=oid:406148 for an interview with the director when the film played last fall at aGLIFF.)